A Glimpse of Paradise 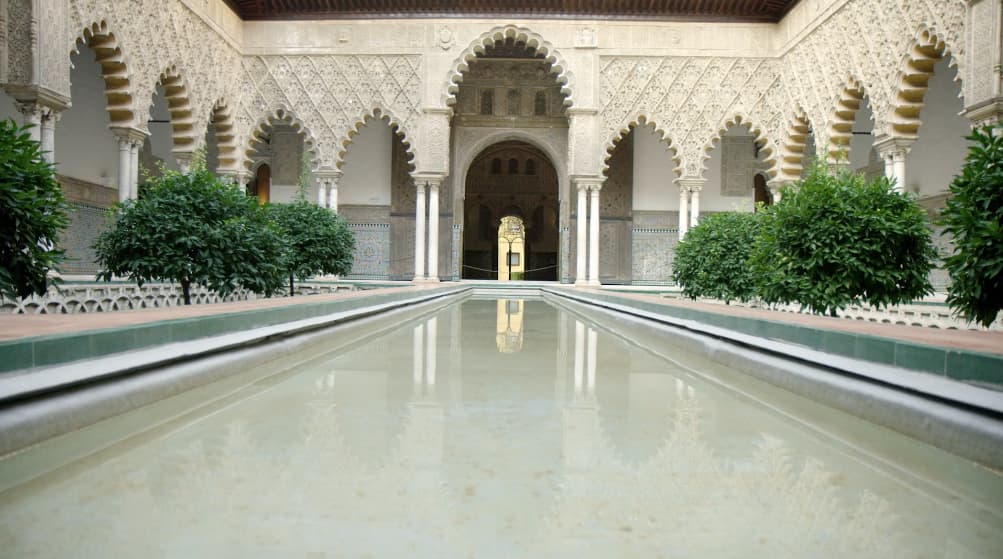 Pavilions, fountains and water channels, cypress trees, damascene roses and pomegranates – gardens have been a central element of Islamic culture and heritage for centuries. If you are ready for a bit more armchair travel around the Muslim world this Ramadan, the five-part documentary series A Glimpse of Paradise takes you on a journey through the past and present exploring garden culture in the Islamic world. 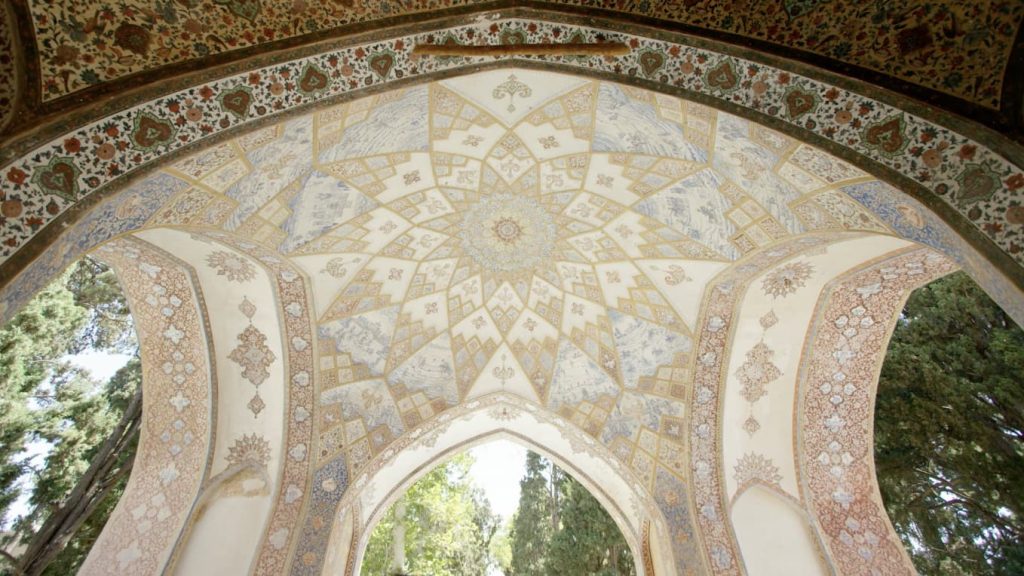 The first documentary in the series, Persia The Invention of Paradise, starts on the Iranian high plateau, which we travel through to the desert city of Yazd. When we arrive, sand is being blown in from the desert. Considered one of the most ancient cities in the world and said to be 5000 years old, it contains the Dowlatabad Garden, fed by irrigation channels known as qanat, forming part of a 3000 year old irrigation system bringing water from the mountains. Here, protected by a wall from the sands of the desert, pomegranates, figs and grapevines flourish, and we discover that the English word paradise has its roots in the ancient Persian word pari-daiza, meaning a walled garden. 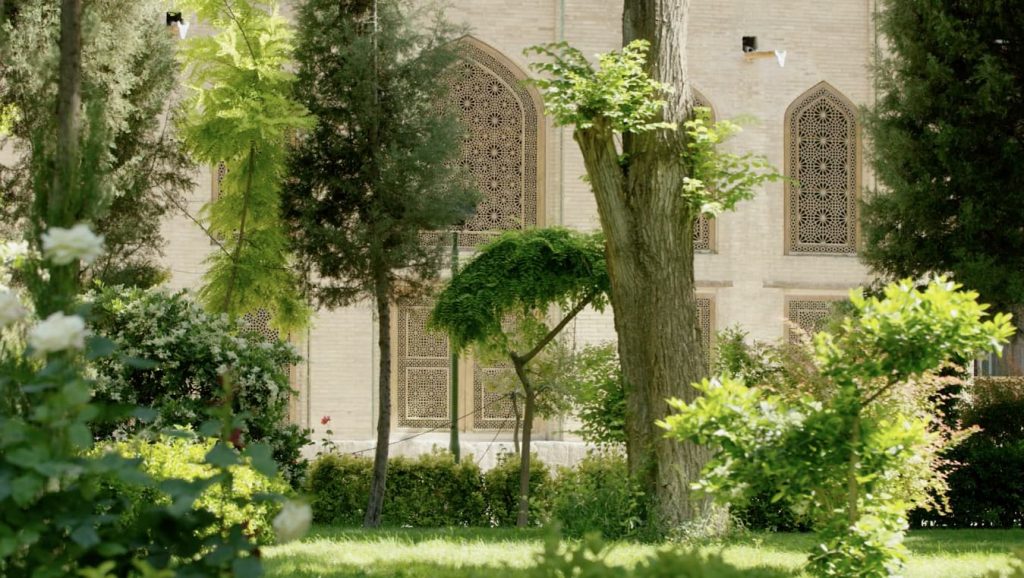 Next we visit the gardens of Isfahan and Shiraz. In modern day Iran leisure time is frequently spent in green spaces, with tea often on offer in traditional Islamic gardens, people staying to socialise late into the night. There is a strong link between poetry and gardens, especially in Shiraz, where the tomb of Hafez is located in the Musalla Gardens, and verses of poetry are inscribed decoratively on the walls. Water is always an important feature, pools and channels dividing the garden geometrically, and elements such as ornate pavilions adding architectural interest. 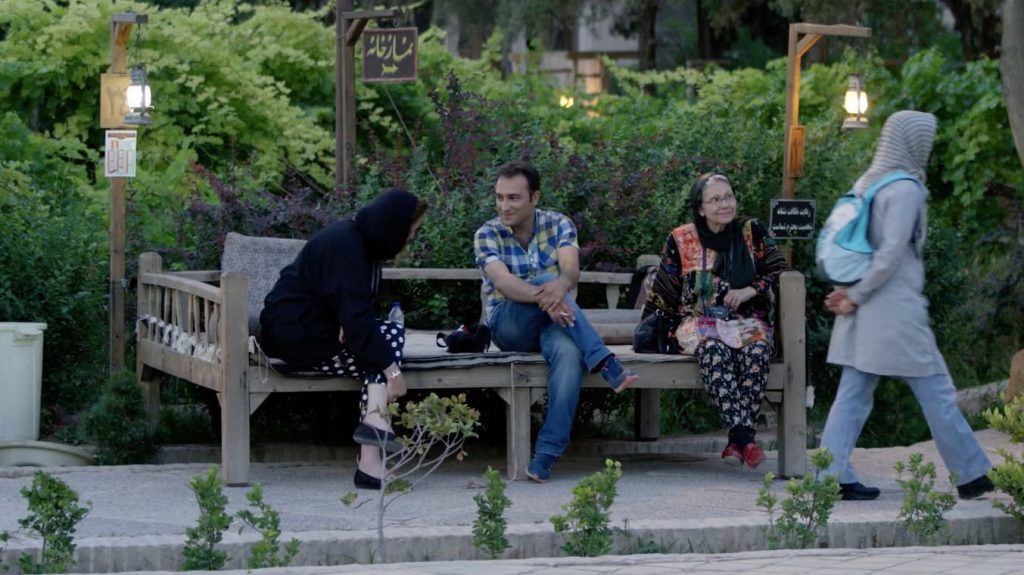 The second documentary focuses on India and the gardens of the Mughals. Here the gardens are a feast for all the senses, with soundscapes created through the deliberate use of water features, and scent playing an important role. In hot countries, use of the garden at night-time comes into its own, as people come out in the evening to avoid the heat of the day and enjoy the cooler hours. William Dalrymple, interviewed in the documentary, comments that  “One of the most attractive aspects of Mughal gardens is the Mehtab Bagh – the moonlight garden.  Of course in moonlight, what is important is not colour, which is important in the day gardens, it’s scent.” 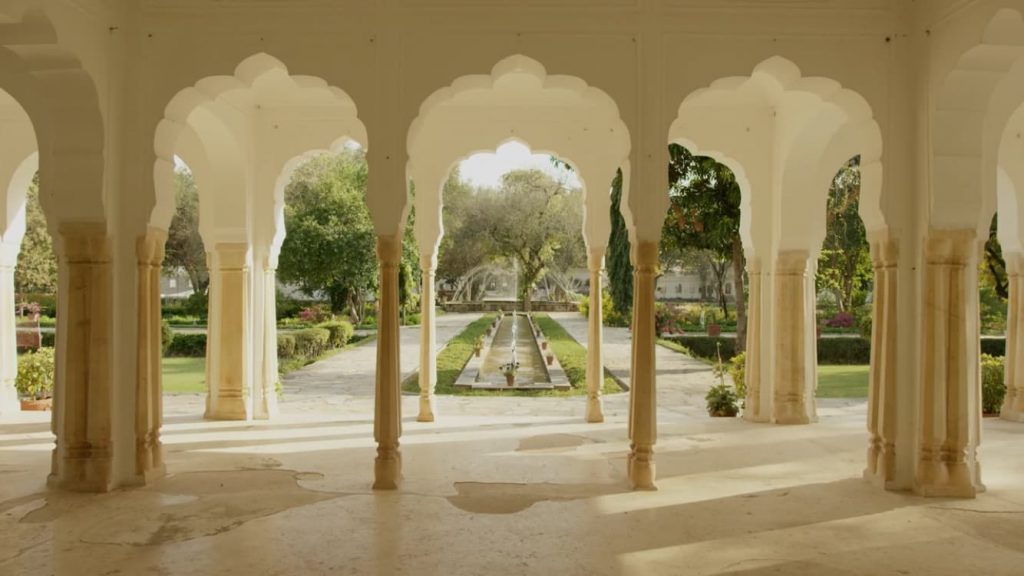 We then move to the rose fields of a village in northern India, where damascene roses are harvested and made into rose water using traditional copper kettles and distillation techniques. Mughal floral motives used in textiles are explored with a trip to a traditional hand block printing workshop, and further Mughal gardens are visited in Hyderabad, Lahore and New Delhi, fitting in time for a trip to look at the revival of the art of depicting gardens in miniature paintings. 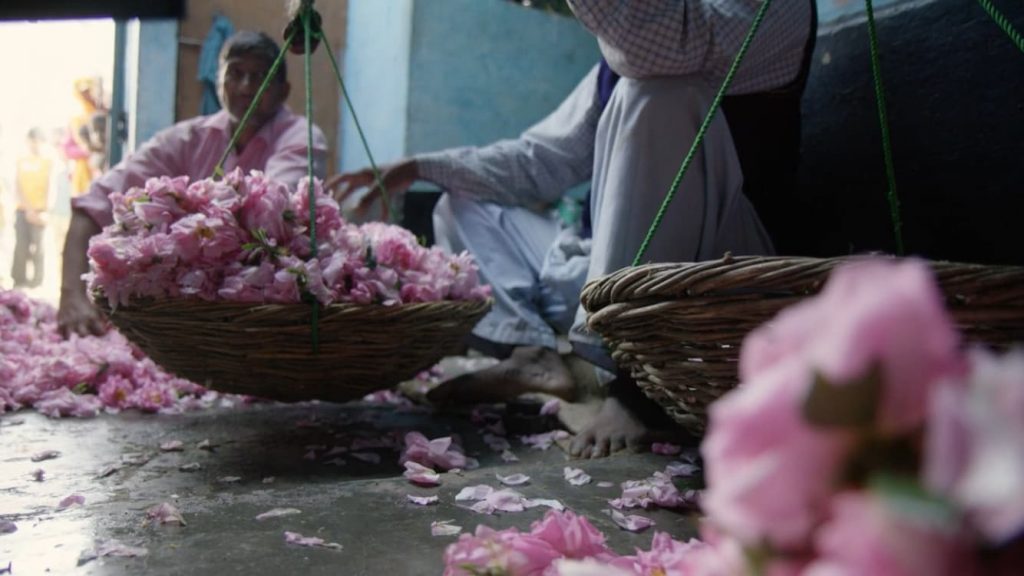 Documentaries three and four in the series look at Islamic gardens in Morocco and Andalusia. In the documentary on Morocco we take a look at traditional crafts such as the making of zillij tile mosaics that appear in Islamic gardens, and visit some beautiful gardens designed and renovated by foreigners in Rabat and Marrakesh. While these gardens use elements of traditional Islamic garden design, it would have been nice to see more of the indigenous courtyard and garden culture of Morocco. The documentary on Al-Andalus makes up for this though, focusing on the elements that make up the heritage of Islamic gardens in the far west, which Morocco shared in and inherited from. The design of water courses, courtyard houses and palaces, and the choice of plants and trees are investigated, with trips to the Alhambra of Granada, the palace city of Madinat al-Zahra near Cordoba, the Alcazaba in Malaga and the Alcazar in Seville. 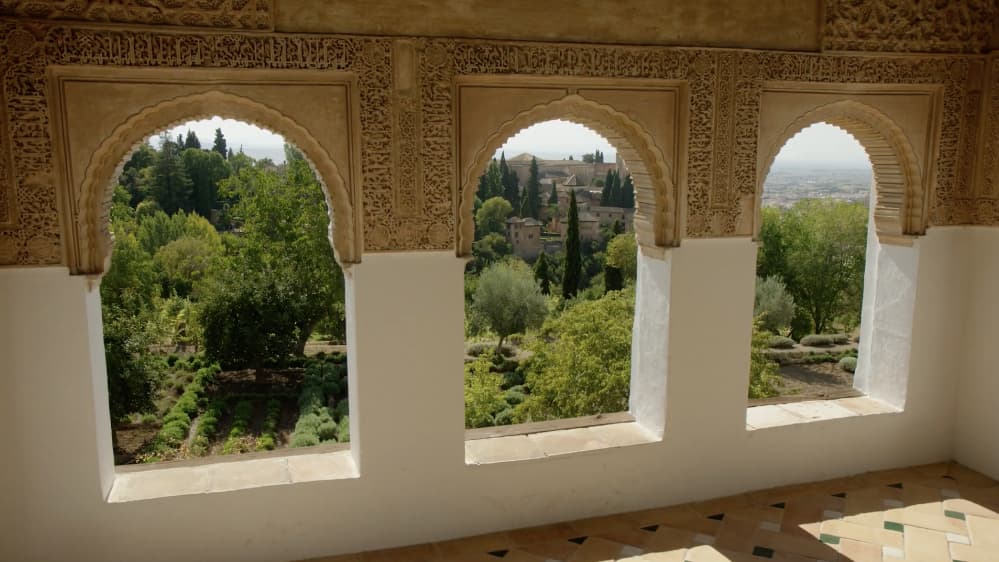 In the final documentary of A Glimpse of Paradise, Arabia The Search for a Green Future, we hear from landscape designers and artists about designing gardens in a manner suitable for dry regions, where water is in short supply. Modern garden features such as lawns are not appropriate in such environments, traditional Islamic garden elements being better suited and more ecologically friendly. We see some of the challenges of urban expansion with a look at Beirut and how traditional houses with gardens have been replaced by an urban environment with few green spaces. This negatively impacts the climate of the area, as trees and gardens have a cooling effect on their immediate environment. 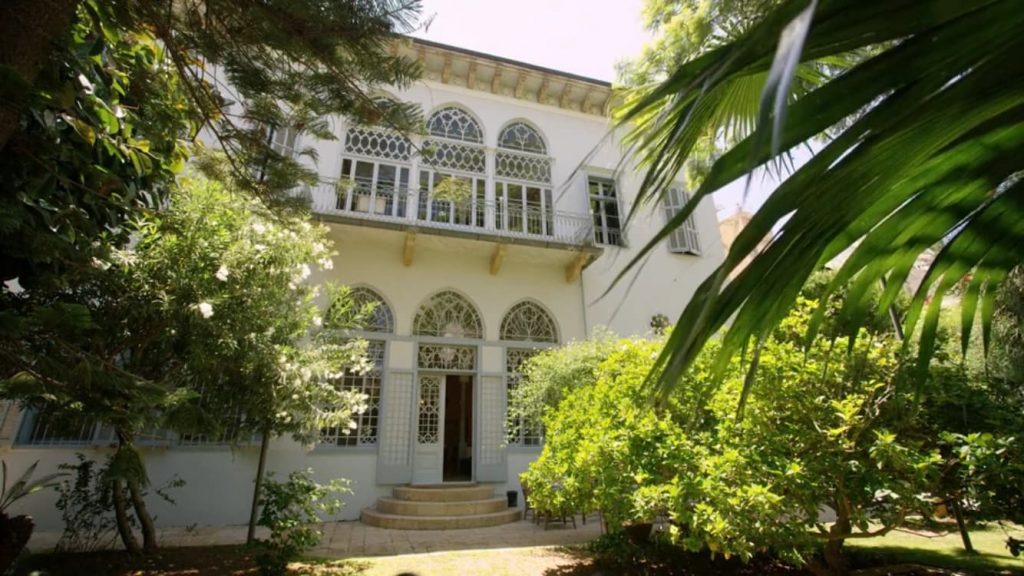 Next we go to investigate efforts to green the desert using native plant species around Riyadh in Saudi Arabia, and look at the challenges of managing water resources for a big desert city. We travel to the recreation areas near the water in the nearby Wadi Hanifa, where families love to picnic, especially in the evenings, when it is cooler. Finally we visit the new 30 hectare Al-Azhar park in historic Cairo, highlighting the issue of providing green spaces in modern crowded cities. The park was recently transformed from an area of rubble and landfill by the Aga Khan Trust for Culture, providing a recreational space in the highly congested city and a green lung to improve air quality. 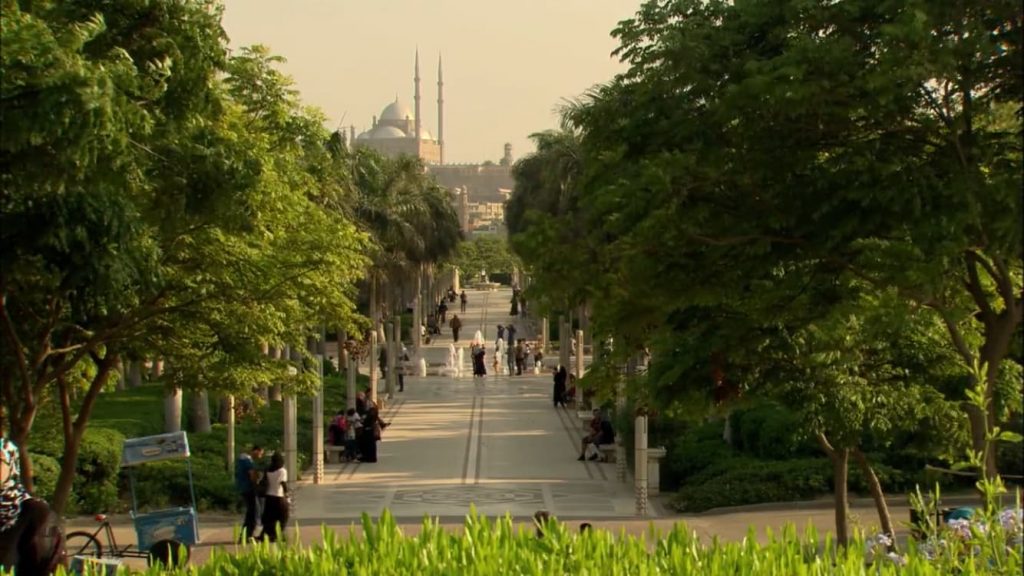 A Glimpse of Paradise is an intriguing introduction to garden culture around the Muslim world in the past and present. Fittingly, it ends on the topic of how gardens fit into the modern world, and how the heritage of Islamic gardens can be used in meeting the challenges of today. Gardens and green spaces can have a huge impact on the environment. On a local level they provide green spaces in urban planning, improve air quality, sequester carbon and lower carbon dioxide levels, lower temperatures, and provide recreational spaces in crowded cities, and on a global level they counteract desertification and climate change.