Documentaries for Ramadan: 4. Ramadan in the Islamic World

The travel documentary series Ramadan in the Islamic World is an immersive experience, discovering the cultures and traditions of countries around the world as they celebrate the month of Ramadan, and also exploring their geographical and architectural beauty and diversity.

Watching episodes of Ramadan in the Islamic World gives you the satisfying sensation that you have almost been to the countries yourself, together with a sense of solidarity with brothers and sisters around the world as they welcome and then bid farewell to the holy month. We learn about special Ramadan traditions specific to each cultural background and the dishes and drinks that have become part of the Ramadan cuisine in each region. Below we look at three of the thirty episodes of Ramadan destinations visited in the documentary series.

This episode begins with shots of the azure waters of the coastline, sandy beaches and palm trees, and whitewashed village houses, windows painted a striking royal blue providing a strong visual contrast. We then find ourselves in desert scenes of camels and sand-coloured adobe buildings. The rich Islamic heritage and beauty and diversity of nature in Tunisia is highlighted through footage shot walking through its streets and aerial views showing town and cityscapes and coastal and desert environments. 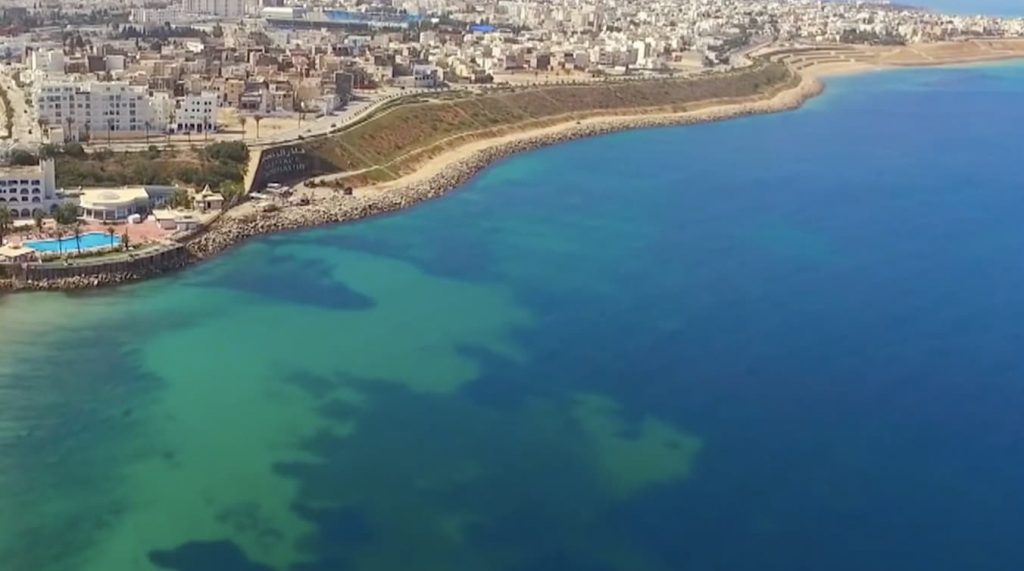 In Tunisia it’s a tradition to prepare for Ramadan by renovating the house, for example painting walls and ceilings with bright new colours, and we see some examples of houses prepared for Ramadan. We then visit the Zaytuna mosque and university, which is among the first universities in the Islamic world, and the second mosque built in Africa, completed in the year 116 of the hijri calendar. 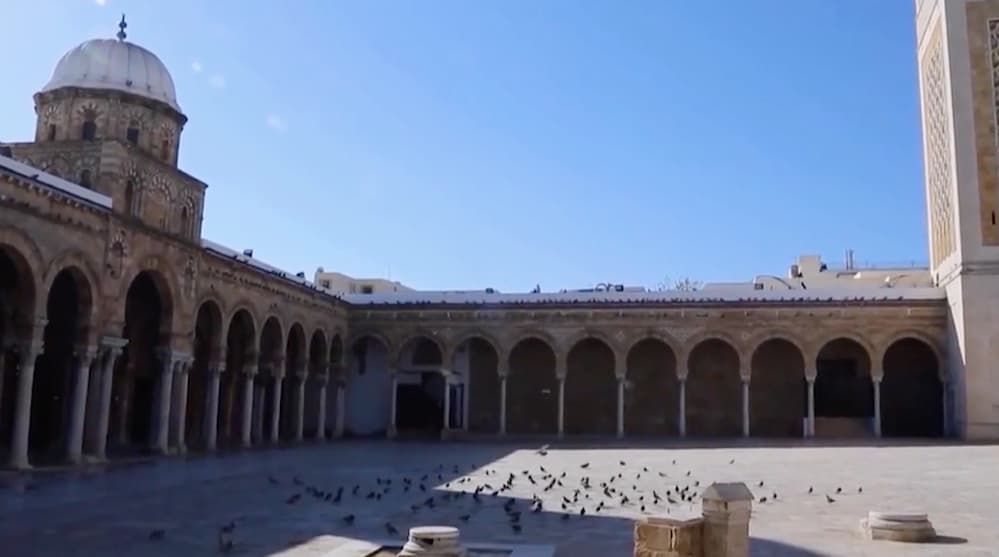 Specific Tunisian Ramadan customs focus on family, with special ceremonies celebrating engagements on the 27th night of Ramadan. For iftar in Tunisia, Frik, a meat and wheat soup served as an appetiser is accompanied by Brik, filo pastry filled with meat or potatoes, together with dates, yoghurt and dumplings. Baskets and boxes of food are distributed to the poor for Ramadan, and this is a tradition of charity with a long history in Tunisia. Another special Tunisian Ramadan custom concerns a man called Abu Tubayla (father of the little drum) who roams the streets calling the people for suhur by tapping on his drum and singing. Talks in the last ten days take place in the main mosques, with sweets, clothes and toys displayed in the markets in anticipation of the Eid celebration, while houses are decorated and Eid cakes and sweets are prepared. 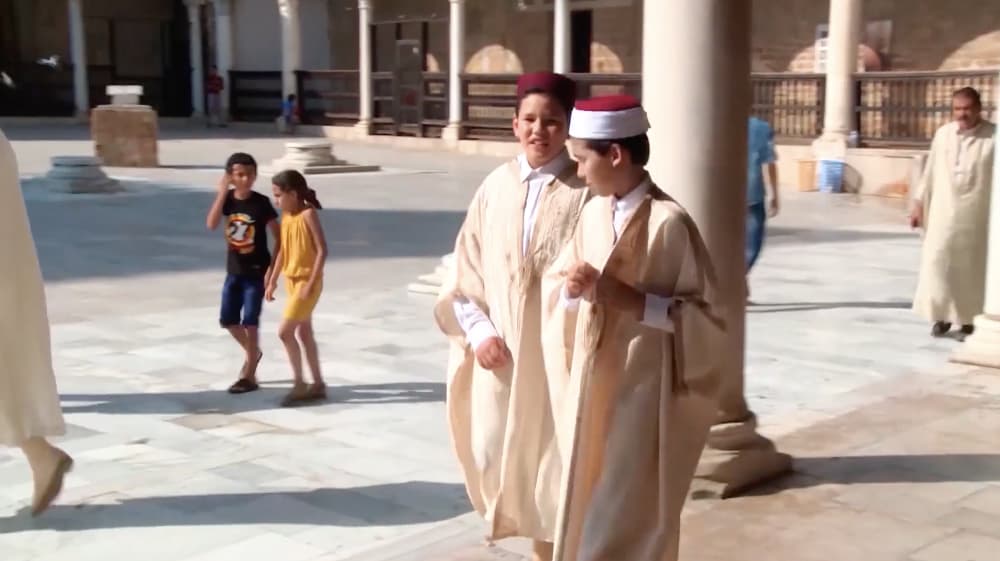 The episode of Ramadan in the Islamic World on Sudan begins with impressive aerial views of the Nile Delta and of Khartoum, located where the White and Blue Nile meet, hinting at its ancient history as part of the Kingdom of Kush with shots of Nubian pyramids. In Sudan people save produce and money for the month of Ramadan over the course of the year. In the days leading up to the holy month they prepare a popular drink called Helu al-murr, a bitter sweet Ramadan beverage made with cornflower and many spices, including cinnamon, ginger, tamarind, and cumin. Women in the neighbourhood gather in one home to make large quantities of this drink that features prominently at the Ramadan table in Sudan. 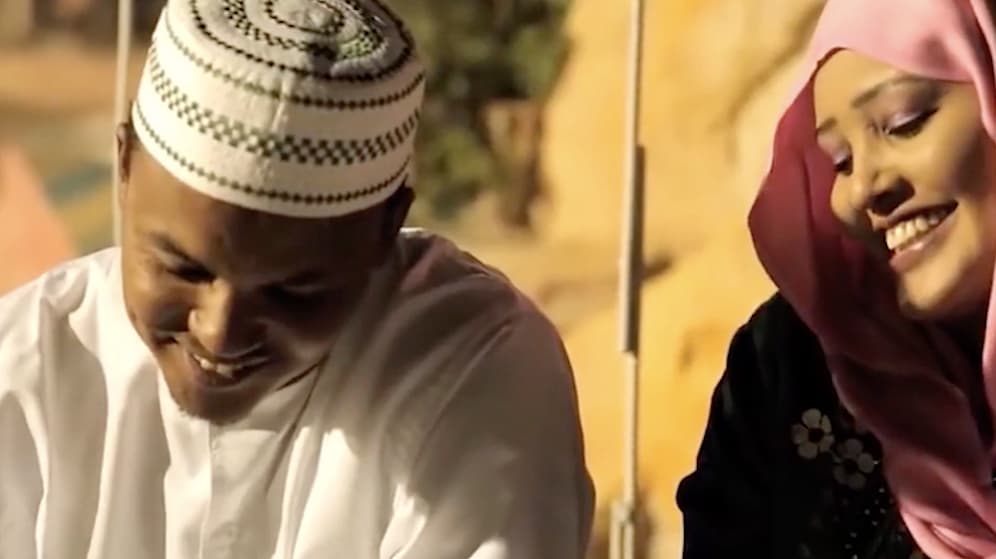 The Sudanese prepare their houses and paint them in preparation for the arrival of Ramadan, buying new utensils for the kitchen. Children who are starting to fast are given their own spoon, bowl and cup. With the announcement of the beginning of Ramadan people visit each other to greet and congratulate each other. Extended families may meet at the home of the head of the family and then all go to the mosque to perform tarawih prayers, frequenting the parks and cafes after tarawih. The festive atmosphere lasts all night with people often staying up until sahur. The markets are then closed in the early hours of the day, with almost everything starting up again in the markets after the asr prayer. 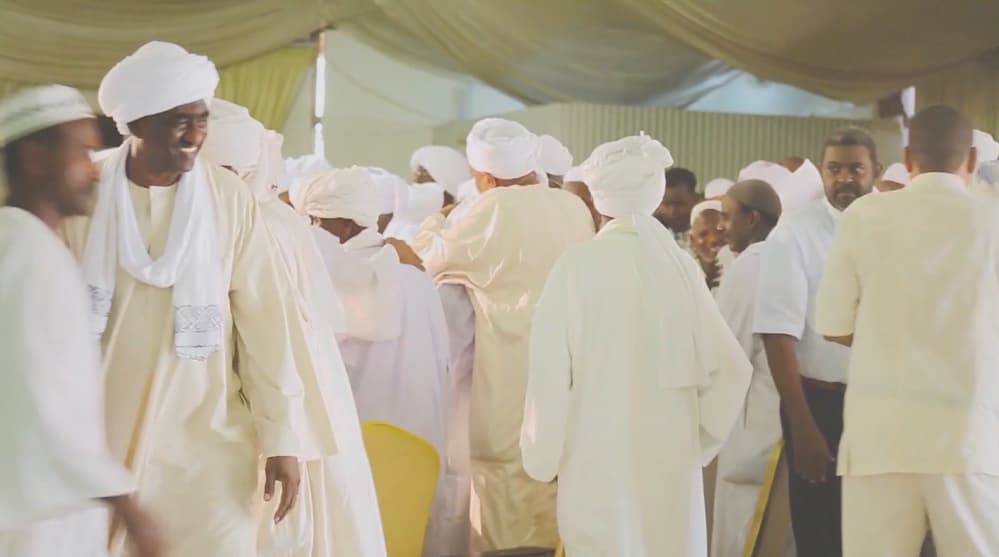 The melodious intonations of the Sudanese adhan float over the scene at maghrib. Iftar is a communal affair, with people breaking the fast in the mosques, in neighbourhood squares and next to the roads. In rural areas people spread carpets on the ground made of palm leaves at the time of iftar, and cut off the roads to invite those driving to stop and share food with them, as a gesture of generosity on the part of the local people. Another tradition is to exchange Ramadan dishes among neighbours, with children delivering the dishes. Preparations for the Eid begin almost a week beforehand, with Eid al-Fitr zakat donations distributed and sweets being made, including pastries with anise stuffed with dates and coconut. New clothes are bought for the children to be worn to the Eid prayer. 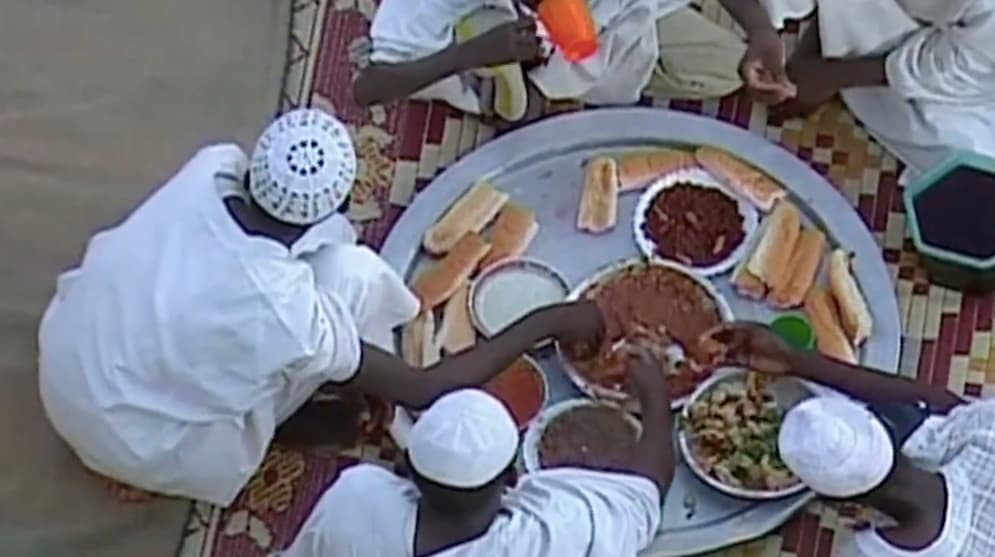 Our exploration of Malaysia starts with shots of lush tropical countryside interspersed with glittering cityscapes that will make you want to pack your bags and go and visit this Muslim majority country at once. Malays make up around 60% of the population and the majority of them are Muslims, while the rest are mainly Chinese and Indian, following Buddhism, Christianity and Hinduism. In Ramadan the streets are filled with a festive atmosphere and are cleaned and decorated with lights. Bazars selling special Ramadan ingredients and dishes become crowded and Muslim Malaysians decorate their houses with crescents, candles and lights. 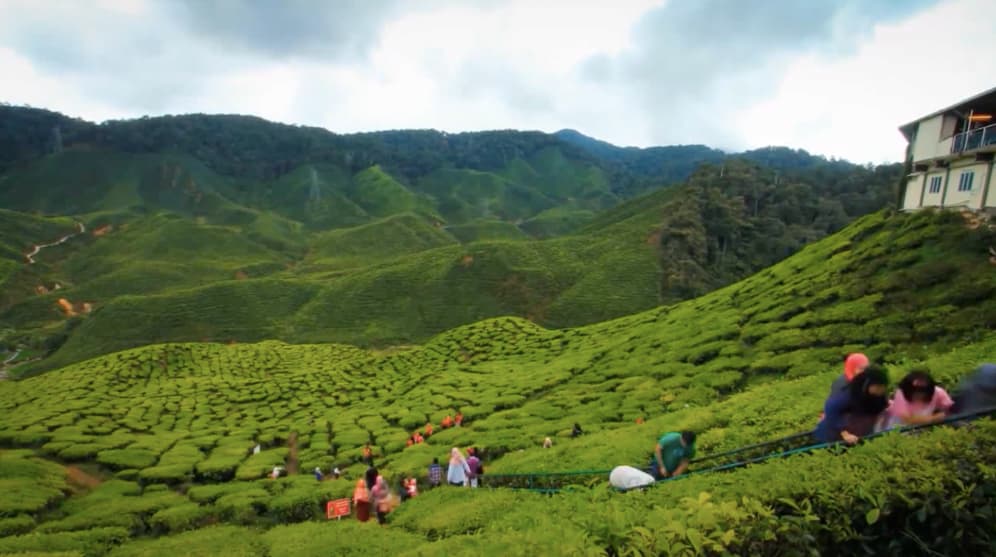 Mosques in Malaysia are open day and night during the month of Ramadan, and this episode shows us some impressive examples. We visit the Zahir mosque located in Alor Setar, the capital of Kedah state in Malaysia. Built in 1912 it became one of the most distinctive architectural monuments in the country and has been voted one of the top ten most beautiful mosques in the world. Here competitions for memorisations of the Quran are also held each year. We are also treated to beautiful aerial views of the pink domed Putra mosque located in Putrajaya, and built on the waterside, and the stunning blue domed Sultan Salahuddin Abdul Aziz mosque of Selangor. 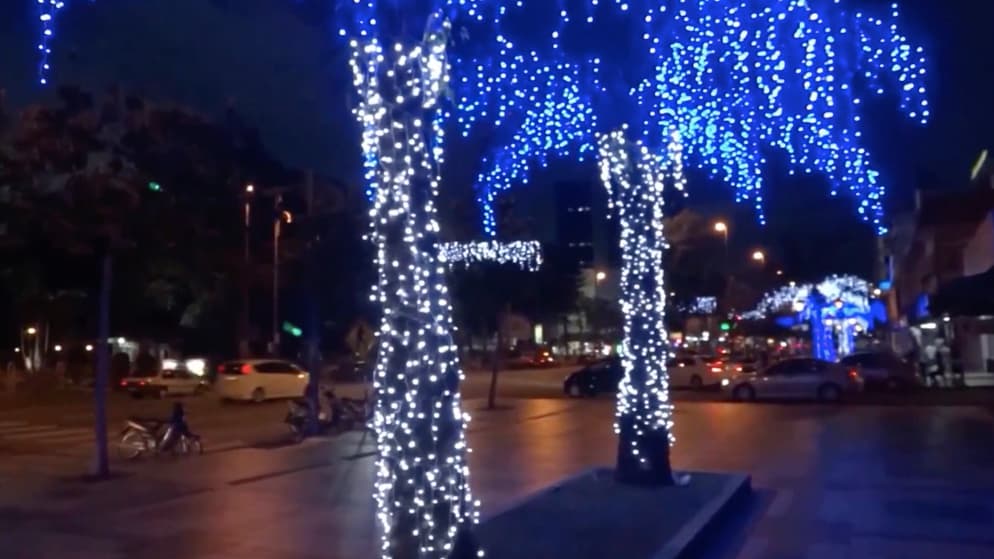 Malaysians celebrate the arrival of Ramadan through the striking of drums which are also used to announce the arrival of the end of the fast. Malaysian families meet at home or in restaurants for Iftar. Gracing the Ramadan table, we find a syrup made of water and dates, rice dishes, and bamboo stuffed with meat or rice, with a special beverage also being consumed for sahur, the predawn meal before the fast begins, to help with hydration during the day. Dishes of Ramadan food are distributed from the mosques with free meals for the poor and for workers in the city. In villages one house is responsible for feeding the people of the village each day during the holy month of Ramadan as a way to increase community spirit. Attendance at mosques increases in the last ten nights of Ramadan, with many people traveling to far away states in order to visit their families for Eid. Meanwhile relatives, neighbours and friends are all received in Malaysian households during Eid, participating in a Malaysian tradition known as the open house where Eid delicacies and cakes are served to guests. 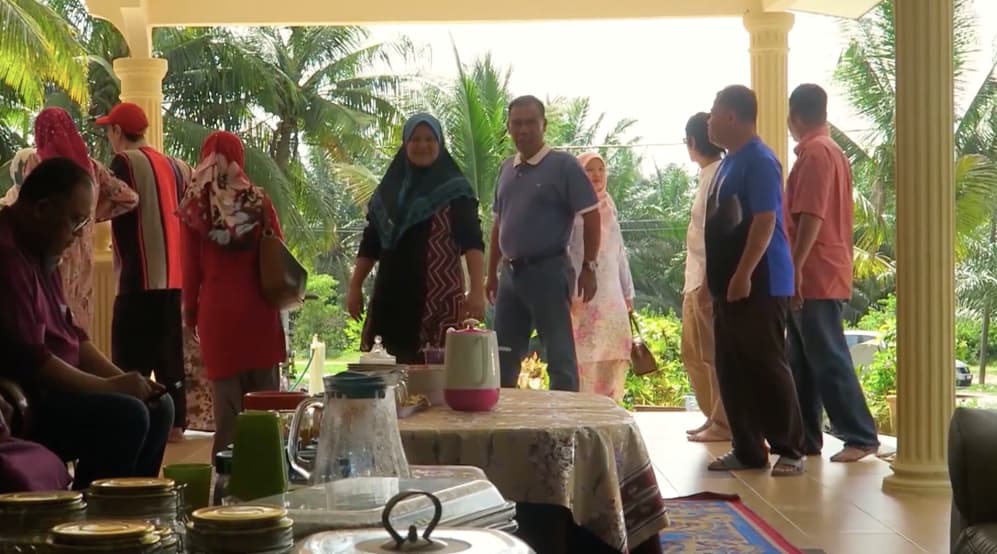 The wide number of cultures and countries visited in Ramadan in the Islamic World is impressive and gives us a fascinating glimpse into the lives of fellow Muslim around the world as they celebrate this special month. The extensive use of time lapse and speeded up footage used in the series produces an artistic effect and provides a panoramic and expansive view of the places visited, but can also sometimes feel a little dizzying. However as the episodes progress these techniques are used more sparingly, allowing for a more contemplative exploration of the countries and their customs. After watching a few of these episodes, virtually travelling around the Islamic world in thirty iftars, you may well find yourself adding a few more destinations to your bucket list of places to visit.