Gaza Surf Club is a heart-warming documentary that takes us to the infamously conflict-ridden Gaza Strip and follows the stories of its citizens as they try to combat their desperate situations by finding freedom through surfing.

Set in the dusty ruins of the narrow strip on the shores of the Mediterranean sea, the documentary Gaza Surf Club follows the lives of ordinary people in the war zone and the small fragments of normalcy they manage to salvage in their plight. Despite not being known for its great waves, surfing is one of the few activities still open to Gazans, and as a result has become part of their culture. The sea and beach are at the heart of the lives of many of the people. However targeted attacks, diminishing rights over their land and scarce supplies threaten these traditions.

Released in 2016 by German directors Philip Gnadt and Mickey Yamine after over five years in the making, the documentary was screened at the Toronto International Film Festival of the same year to wide acclaim. It centres on three individual narratives; fisherman and surfing elder Abu Jayab, hopeful visionary Ibrahim and a young girl, Sabah. All three narratives present a different view of surfing culture and its impact in Gaza as well as the effects that the constant war and political turmoil have had on the sport.

Ibrahim is a young Gazan intent on opening a clubhouse to encourage the growth of the sport in his country. He wishes to obtain a visa to travel to Hawaii in order to learn how to make surfboards himself as part of a workshop. The import of surfboards into Palestine is prohibited by Israeli sanctions, and with no charitable organisation willing to fund his vision, Ibrahim sets off to accomplish his dream alone.

His personal challenges are put into perspective by the struggles of those around him such as Abu Jayab, who despite struggling to feed his family continues to see his teaching of surfing as being of the utmost importance and a personal responsibility. 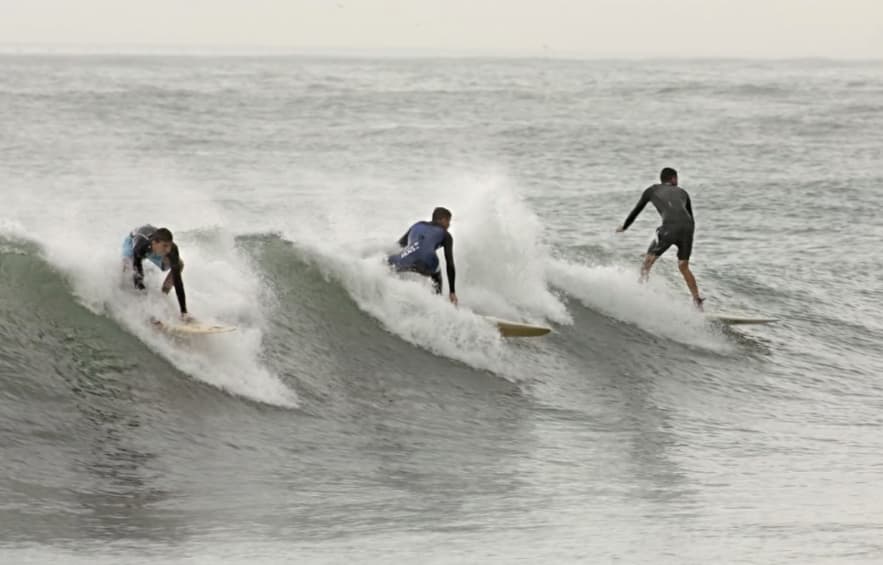 Sabah’s struggles are different to those of her male counterparts as she is prohibited from surfing at all due to mounting societal stigma against women under the Hamas regime. Her aim is simply to be able to return to the same waters in which her father taught her to swim and surf, a task that will see her battle cultural norms as well as all the other tribulations that face Gaza’s surfers.

These young men and women remain steadfast in their devotion to their sport and allow viewers an insight into the importance of the sea and its shores to Palestinian culture and livelihood. The sea, aside from the limited fish they are able to source from it, provides a reminder of their heritage and personal desires that transcend the current political and humanitarian crises. It is a sport passed down from parents and older members of the community and plays a big part in their relationships to each other and their homeland.

In an interview with the website Surfer, co-director Gnadt is quoted as saying: ’Surfing is a sport that stands for personal freedom, while in the stark contrast of Gaza’s backdrop, and being one of the most isolated and desolated countries in the world’, a contrast which is clearly conveyed in this documentary. The tensions between the desire for personal freedom and the trials of existence in a war-zone are emphasised through the incredible cinematography, with shots of bombed out houses in the city and rubble marred beaches contrasted with gleeful freedom evident in the faces of all the surfers, both young and old. The documentary presents human experience in an inhumane environment transforming these characters from victims into ordinary people before the viewer’s eyes.

Compared to the problems of oppression, Ibrahim’s dream to open a surf shop and clubhouse seems inconsequential. However it exposes the human realities beneath the political narrative we are so used to hearing about in the news. Surfing in Gaza is one of the only forms of freedom still afforded to its people, a freedom which is being frequently infringed upon, with Palestine’s territory both at sea and inland dwindling.

Gaza Surf Club presents a new facet of the renowned region and allows us to see it from a human perspective, one we rarely get the privilege of witnessing. A story that is equal parts hopeful and despairing is formed, wherein personal dreams are confronted by the reality of their situation. However they never allow it to quash them entirely. The enduring message is that the people of Gaza, as they always do, find a way to overcome their circumstances and remain hopeful for a better tomorrow in which they and their sport can thrive.