73 year-old Sensei Togieda Flowers runs a karate dojo in Cape Town and is tasked with bringing some discipline into the life of energetic six year-old Nawar. Like Water is a short documentary about martial arts as the key to confidence in marginalised communities. 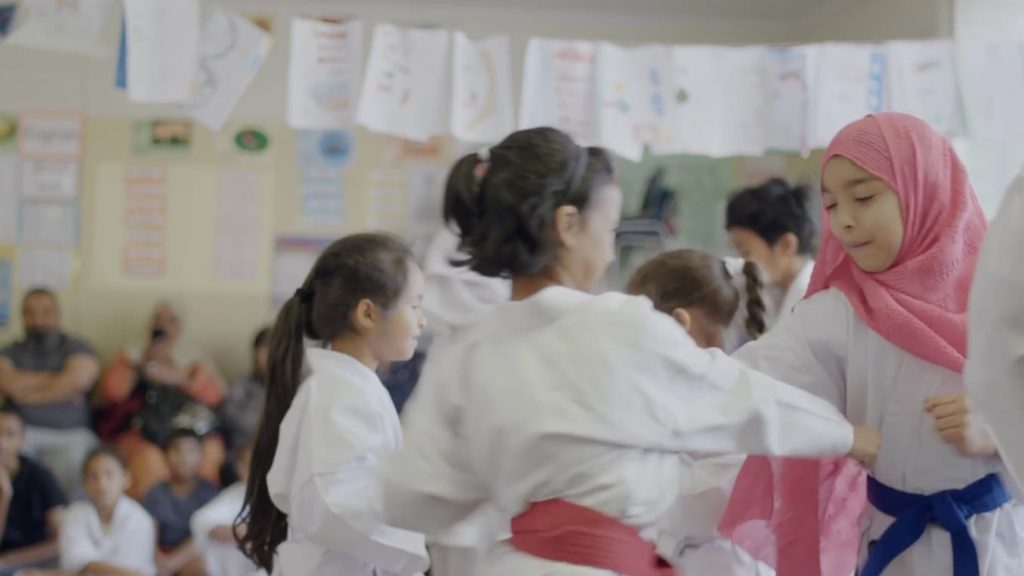 Inspired by the popularity of Bruce Lee films and the darkening Apartheid political tensions, martial arts underwent a boom in popularity in Cape Town, South Africa during the 1970s, with various versions of the sport fast becoming ‘a way of life’ in the region. This boom resulted also in the establishing of the Surrey Dojo-Kyokushin Karate School. Its current owner Sensei Flowers started her own karate journey at the school herself in the 1970s under the instruction of her husband who ran the school at the time. Following his death she took up the responsibility of running the dojo herself and continued his work in teaching many more generations of children. 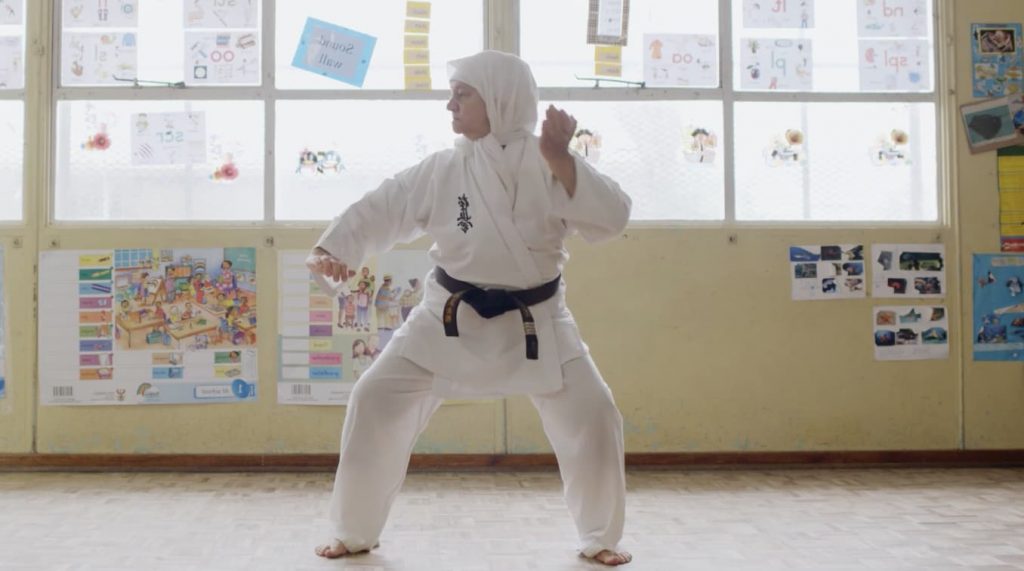 Filmed in a diverse community in Cape Town, this documentary centres on the spirit of karate and how its tenets, once learnt, are invaluable tools to success in daily life. The Surrey Dojo-Kyokushin Karate School is a warm, friendly environment, welcoming students from all walks of life. Many of the local children who attend the club come from poor, underprivileged families living in an area known for its violent crime. Sensei Flowers endeavours to teach self-defence, self-discipline, but most of all self-belief to the children that attend her dojo, schooling them in a way of life she believes is crucial to developing their resilience to an often harsh world. 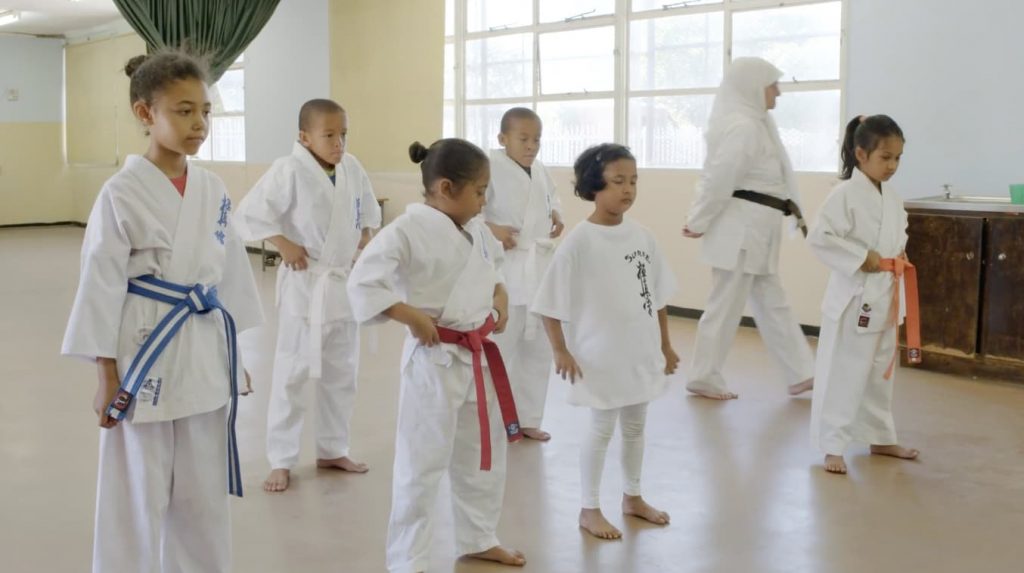 The quest for the attainment of these virtues and skills is undertaken by our pink tutu wearing protagonist, six year old Nawar. Her mother worries about her hyperactivity and how it affects her attendance and quality of work in school. Nawar is not the first in her family to participate in the sport, with her older brothers having also been students at Sensei Flower’s dojo. Her mother hopes that in sending her daughter to be trained at the same dojo as her brothers she will learn self mastery. Nawar is joined on her daily adventures by her fluffy toy rabbit called Carrots who follows her in her journey to becoming a karateka (student of karate). 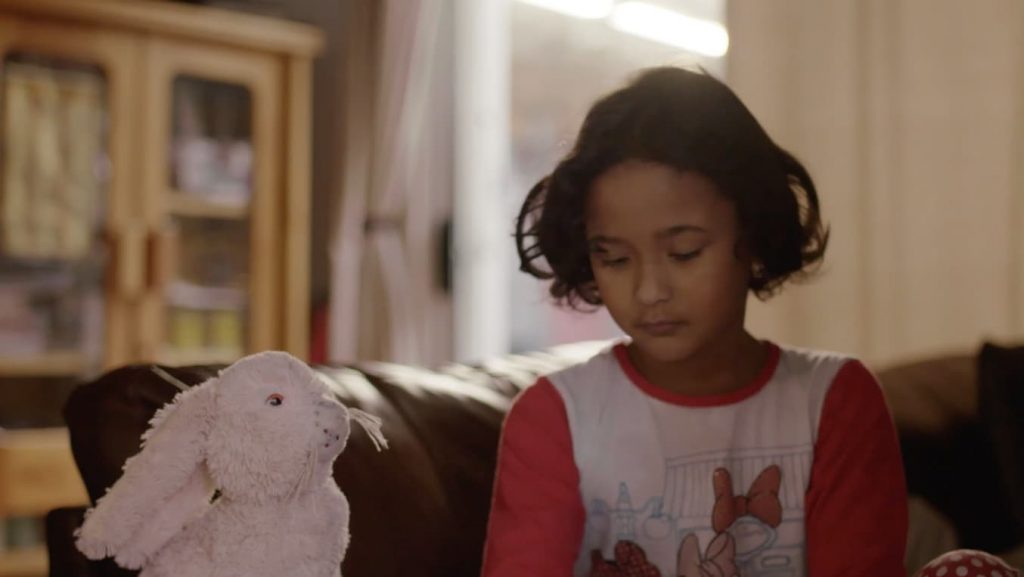 With the hope of Nawar learning discipline being the driving force behind her enrolling in karate classes, we see throughout her training how she learns to be calm and measured in her actions. She is encouraged by her Sensei to achieve this through directing her energy into something physical and productive rather than dampening her fiery spirit. Throughout the feature you see her focus and dedication build both in the dojo and at home as she learns self-discipline through the philosophy of martial arts and is inspired by the wise and encouraging words of her teacher. 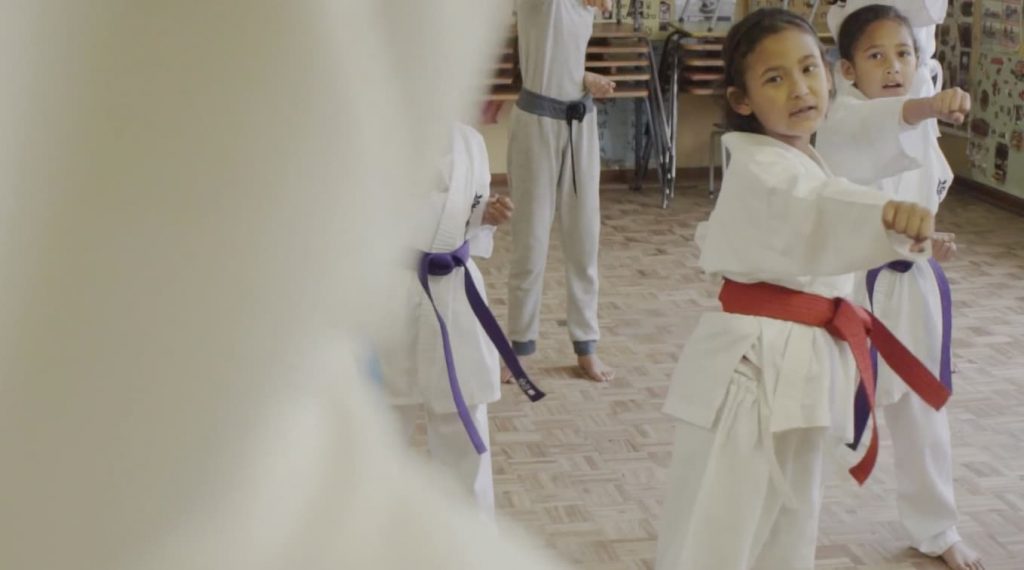 In her pink tutu, sparkly tiara and frequently accompanied by a stuffed rabbit, Nawar may not initially look like the typical karate kid. However this documentary underlines how karate and the ethos of martial arts are accessible to everyone, young or old, male or female and instills values in individuals that benefit the whole community. Karate is used as a tool to improve the lives of the marginalised citizens of Cape Town through mastering their bodies, allowing them to ultimately master their minds and find freedom in self-assurance. 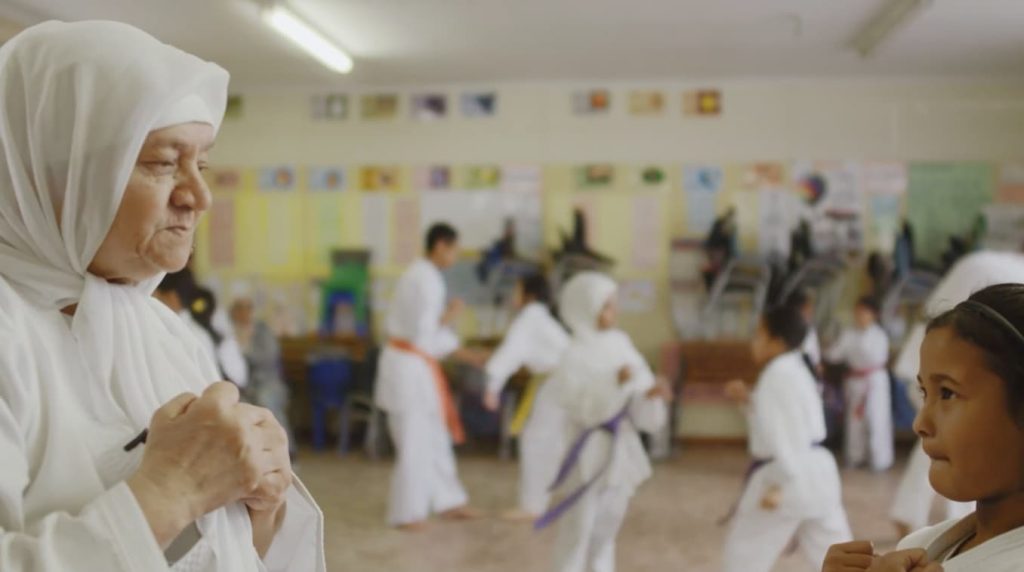 Despite only being a 15 minute feature it is nevertheless an inspiring story about learning to thrive even in difficult circumstances and how to be steadfast when faced with personal trials, lessons that transcend racial, generational and gender-based boundaries. Sensei Flowers instils in her students the strength to persevere through whatever hardship may come their way starting in the dojo and extending to every corner of their lives. 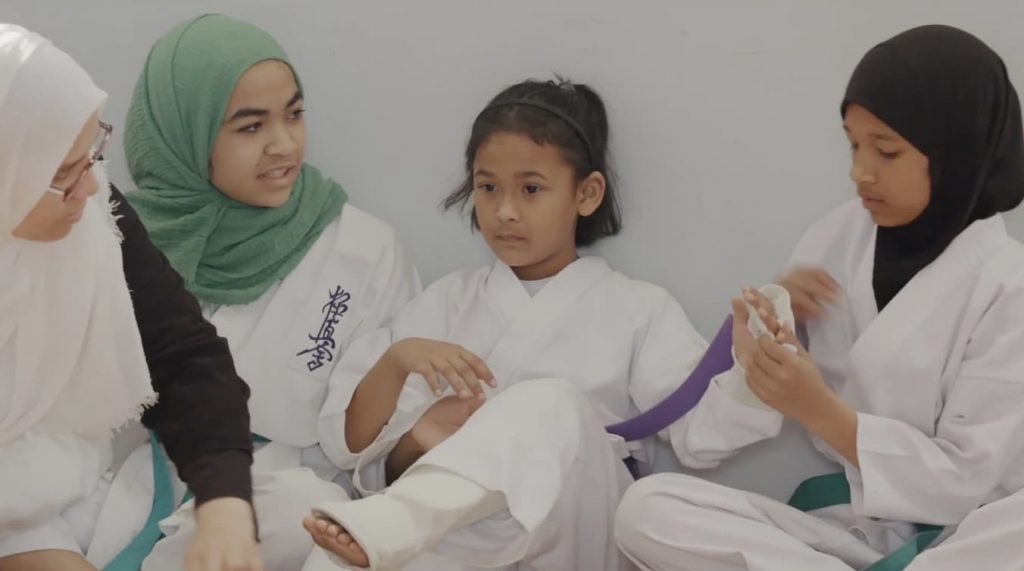 The imparting of the courageous, determined yet measured spirit of karate is this Sensei’s key to success even with the most rambunctious of children. She uses the illustrious history of martial arts in Cape Town to inspire her students as she gently guides them towards self-mastery and becoming physically but more importantly mentally strong. 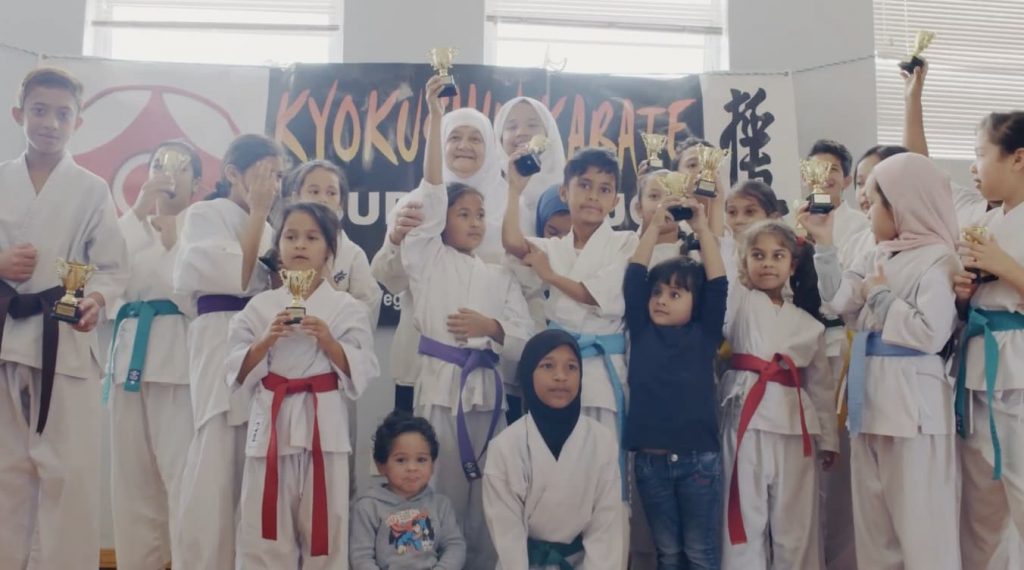 These valuable skills and the self-worth they teach help to provide these children with the tools to flow like water through the cracks, remain steadfast in their devotion to their own self-worth and transcend their difficult situations. 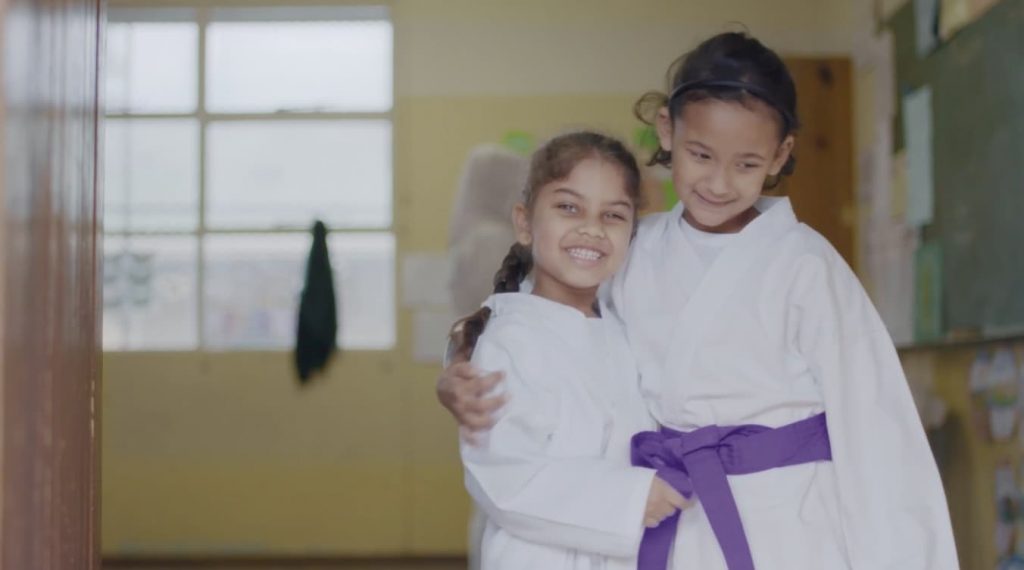