A beautifully understated documentary film about the life and art of Iranian artist Monir Shahroudy Farmanfarmaian, which explores artistic practice, exile, and discourses around Islamic geometry. 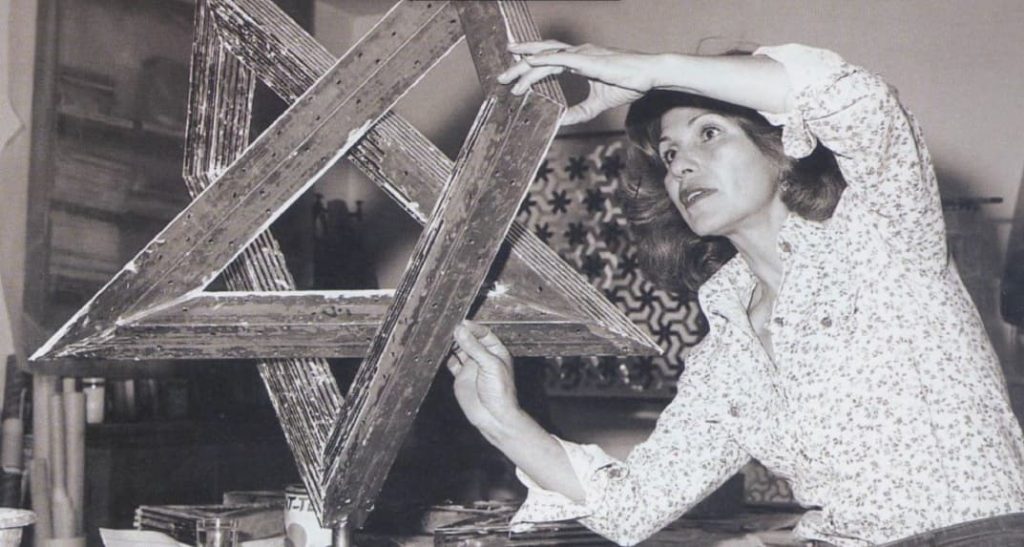 Monir follows the life and art of Iranian artist Monir Shahroudy Farmanfarmaian. Bahman Kiarostami explores themes of exile, Islamic art, and the Western gaze on Iran. Kiarostami may be familiar to fans of Iranian cinema since he is the son of critically acclaimed Abbas Kiarostami. Unlike the auteur style of his father, and aside from one short film he has made, Bahman’s directorial work has so far consisted of documentary-style, essayistic and intimate explorations of the lives of various artists and musicians.

Monir herself appears in the film, both in the first and final frame, working in her studio at the time of filming. In her own words, she is a product of a very grand, broad spectrum of Iranian artistic heritage – with particular emphasis on mediaeval Islamic architecture and geometry. Throughout the documentary, there is an underlying discourse around the question of self-awareness in Islamic sacred, geometric art: ‘At the beginning, I wasn’t even aware that I was making geometric forms’, Monir states at the start of the film, this was until her teacher, ‘Ustad’ Navid, pointed it out to her. 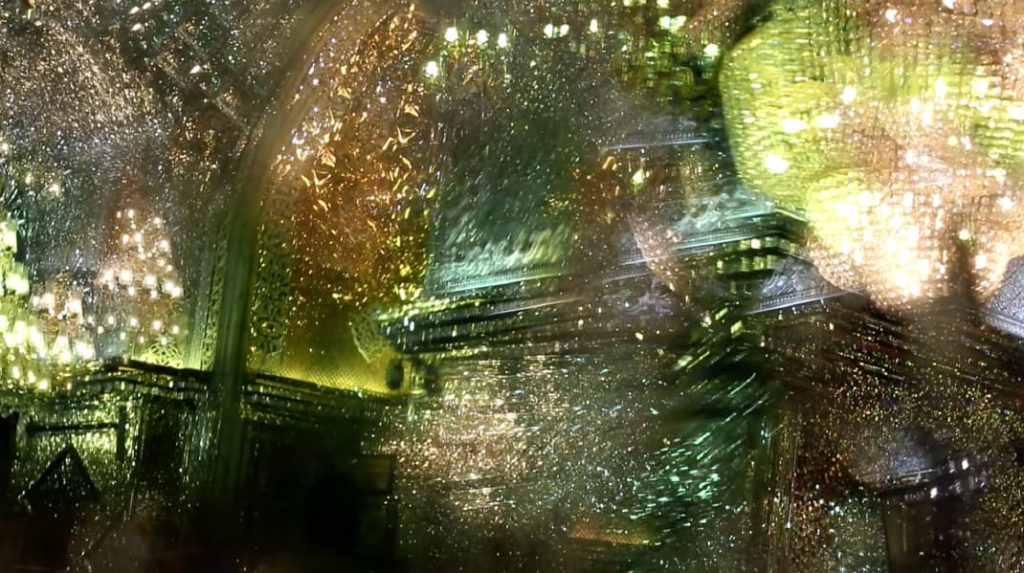 It was an encounter with the architecture in the famous Shahcheragh Shrine in Shiraz which was to inspire the most defining and significant body of work Monir produced in her lifetime, which is Islamic geometric mirror work. Kiarostami’s camerawork shines here, as his use of the mirrors’ refractory, kaleidoscopic and intensely reflective qualities evokes the themes he teases out over the course of the film: of reception, of the gaze, of othering. These frames also intensify our understanding of Monir’s artistic practice, as she speaks about the ways in which the visit to the shrine gave her a wish to bring the effect of mirror work in a sacred space into the daily lives of herself and others. In these spaces, she says, ‘you become a part of the art and the art becomes a part of you … every movement changes the character, the dimension of the art’. 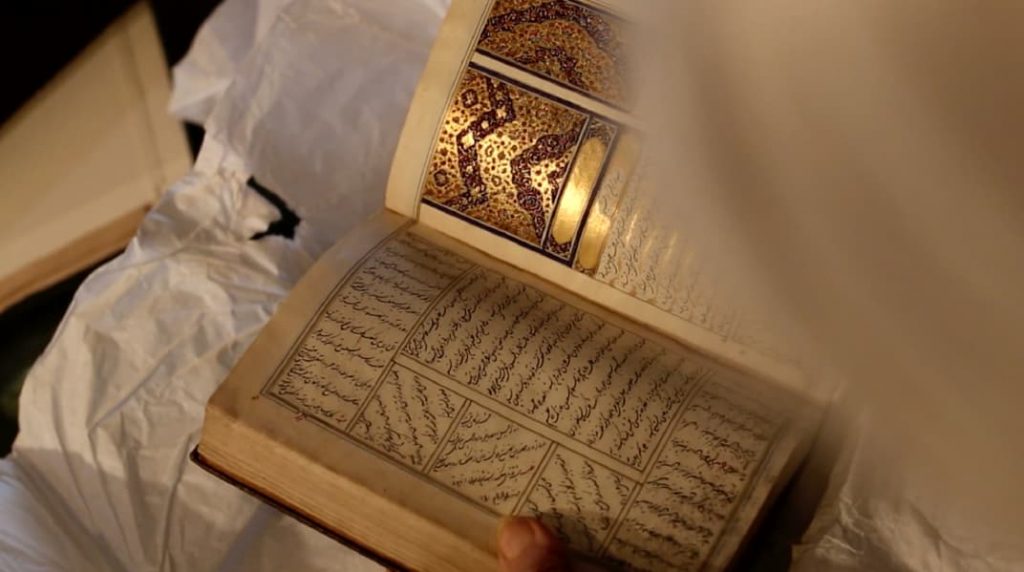 In front of the camera, Monir acknowledges the centrality of Islamic heritage in creating her work, what she refers to as “the roots … the Safavid era when they built those marvellous mosques in Isfahan”. However, as the film shows, before European and American voyeurs, she is more evasive… There is one scene, where a – presumably French – gallerist speaks about Monir’s geometric drawings, stating: ‘these are not just geometric shapes they are based on Sufi philosophy and numerology’ when he approaches Monir to expand on this she refutes his philosophical reading, instead insisting: ‘this is a line on a hexagon only, there is no philosophy behind it’. Refreshingly, the film does not take a single easy view of these readings, rather preferring to allow ambiguity and nuance, and the possibility of many meanings being contained in those geometric forms. There are small filmic detours as art critics, geometers and curators appear to speak on these nuances. One of them, Nader Ardalan, describes how Monir’s lack of awareness of the philosophical intellectual bases of her work is in fact a part of the artistic tradition, and a part of the beauty of her work. ‘I design all these in a dream’, she says. 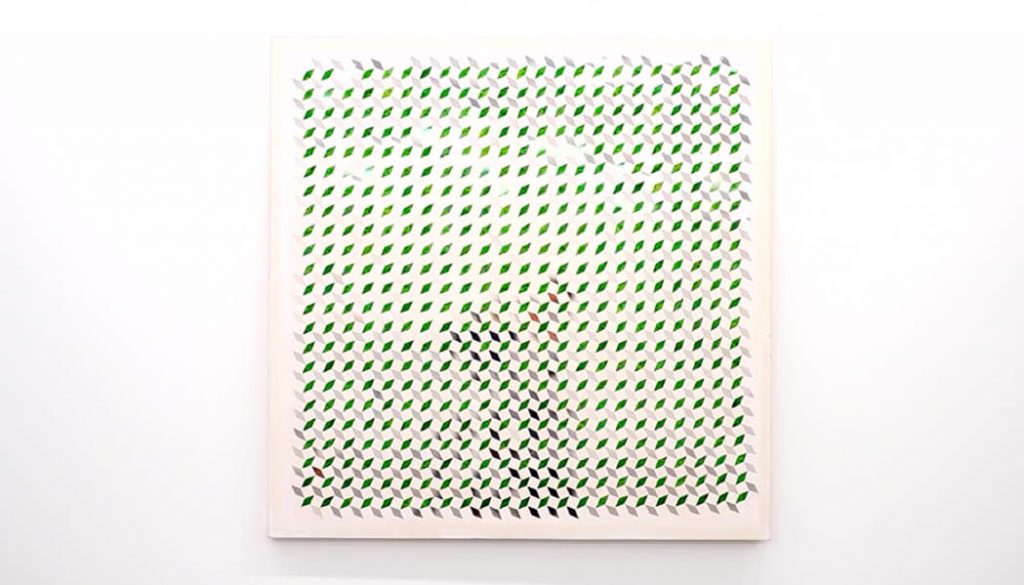 Whilst conversations around Monir’s self-awareness as a producer of ‘Islamic’ geometric art are centred for the early part of the film, the details around her life’s story emerge more slowly and tangentially, through interviews and as Kiarostami shows the progression of her career. Monir left Iran and studied fashion illustration in a number of schools in New York during the 1940s and 50s, during which time she was not considered an artist, although she did become popular amongst the city’s avant-garde art scene, even gifting one of her early works, which resembles an Iranian geometric take on a disco ball, to a young Andy Warhol. What is particularly enjoyable about Kiarostami’s portrayal is that he does not glamourise these parts of the young artist’s life, rather he delves into the complications and the discomfort of being received as an Iranian woman in America during the twentieth century. When, in a public interview, Monir is asked if her male contemporaries in New York took her seriously as an artist, she laughs and says in English, “no way! I was nothing … I was a pretty object over there”. Indeed, the director then shows an American newspaper clipping in which the artist is referred to as ‘that beautiful Persian girl’.

After returning to Tehran in 1957, with a desire to be more rooted in her artistic heritage, Monir and her husband were exiled again in 1979, the political circumstances surrounding this event are not foregrounded in the film (there is a brief mention of Khomeini having accused Monir’s family of being connected with the ‘sinister’ Shah) but it does choose to highlight the ways in which exile complicated her artistic work. Her personal collection, which comprised traditional Islamic artefacts such as a series of Safavid doors, as well as contemporary so-called ‘westernised’ pieces, was confiscated by the revolutionary guard. Despite all of this, Monir did return to her homeland for the final years of her life, and it is in these years that she garnered respect and confidence as an artist, a geometer, a mirror-worker. The film chronicles an increasingly easy and seamless blend of personal and aesthetic elements in Monir’s art, particularly in the two decades after her husband’s death in 1991. In the immediate aftermath of that grief, the artist describes her collage work as a ‘putting together of laments’. 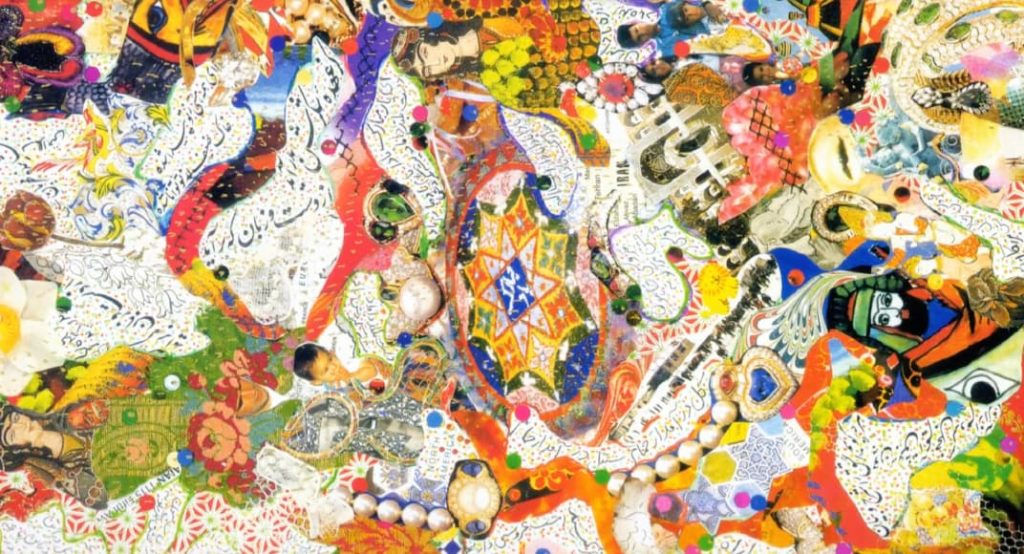 There is a wonderful thematic circularity to the film, as its final scene returns to the informal, handheld camera style of its opening: the artist at work in her studio, and the emphasis on mirroring, reflection, refraction… In the midst of today’s often heightened voyeurism and weaponisation around the positionality of Iranian women, this film instead navigates, undoes, and often disregards, the binaries of personal and political, East and West, Islamic and secular. As such, Monir is a refreshing, meditative and nuanced celebration of one artist’s life and practice, leaving space for the audience’s own reflections. 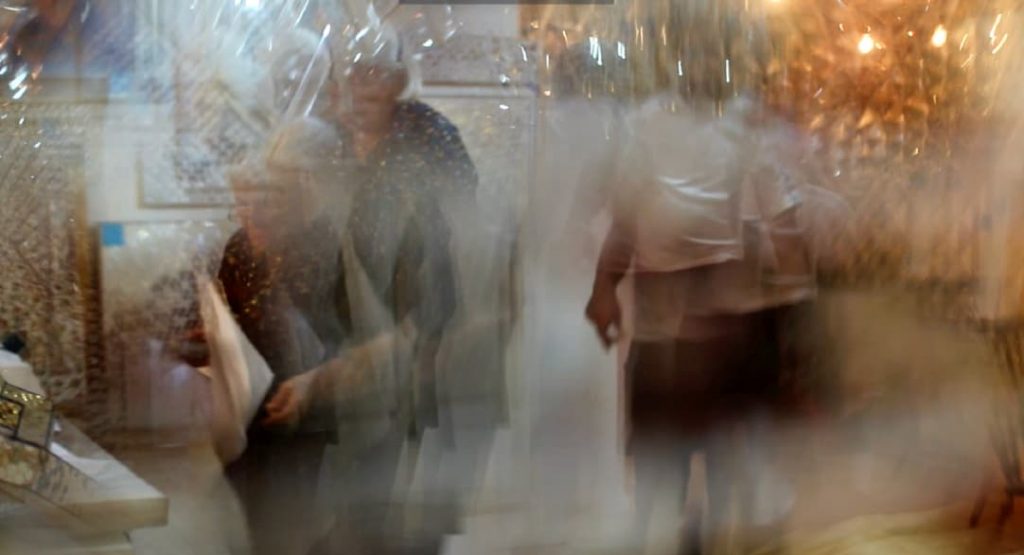 You may also enjoy Beach Flags and Curves of Iran.

Bushra Mustafa-Dunne is a London based writer and poet of Iraqi and Irish heritage. Her work is published in the anthology A Kaleidoscope of Stories: Muslim Voices in Contemporary Poetry, and on Substack.