My Name is Salt: The art of salt farming in India 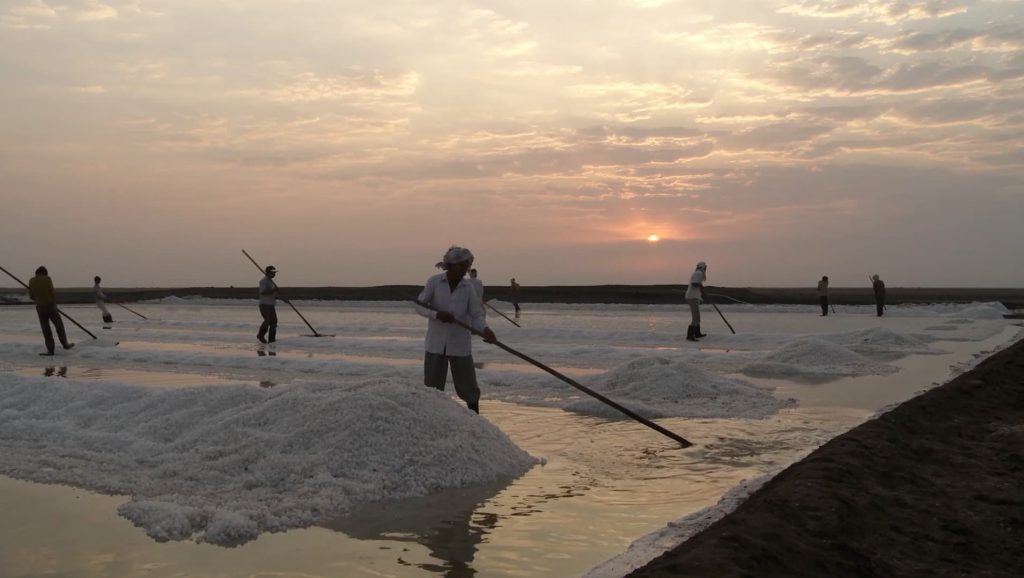 My Name is Salt is an astonishing, visually stunning documentary about the labour and art of salt farming in India and just how much goes into harvesting this essential commodity. 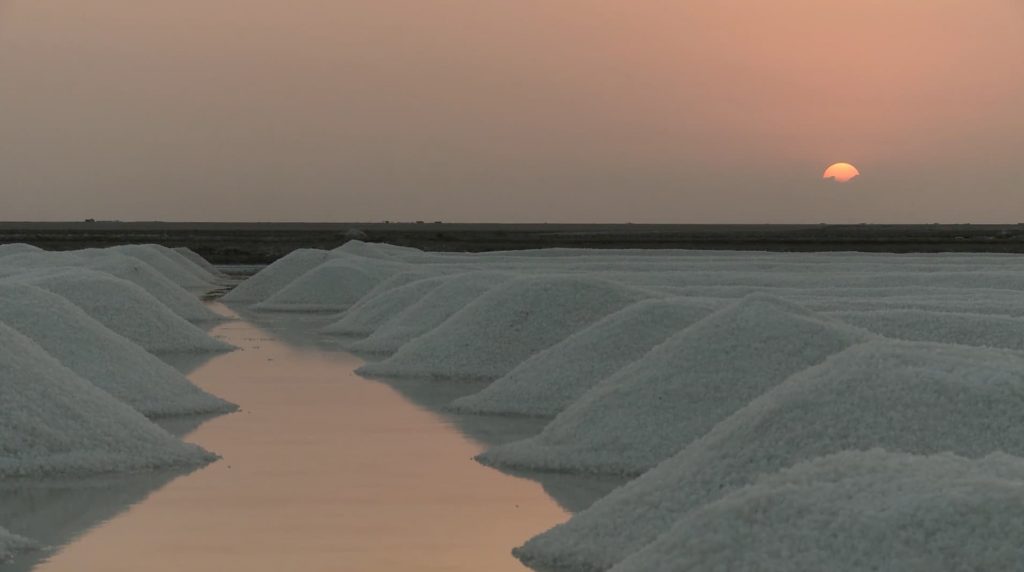 A large amount of salt comes from India, and a large part of this is from the desert of the Little Rann of Kutch in Gujarat. The Agariya people spend eight months farming the salt here, which they then sell to traders for very slim profits. My Name is Salt inspires a sense of awe at the hard work and ingenuity of people in finding ways to eke out a living, as well as respect for the hardiness and resilience of the human spirit. The documentary is also an indictment of the global capitalist system that pays these farmers so little for their months of labour and endurance of their precarious living conditions. 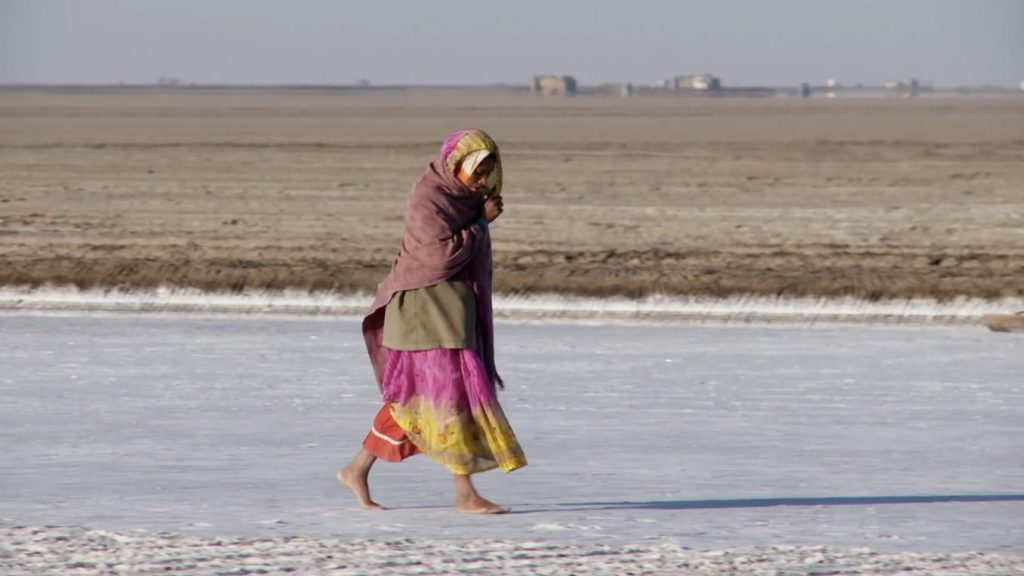 Various folktales around the world, such as Cap-o’-Rushes, tell the story of a father who asks his daughters how much they love him. The youngest replies with a statement to the effect that she loves him as much as salt, and is banished for this. The father later realises the value of salt and that his daughter’s statement was not an insult – this story formed the basis of Shakespeare’s King Lear. My Name is Salt brings home just how valuable this commodity is and the backbreaking labour that goes into its production. 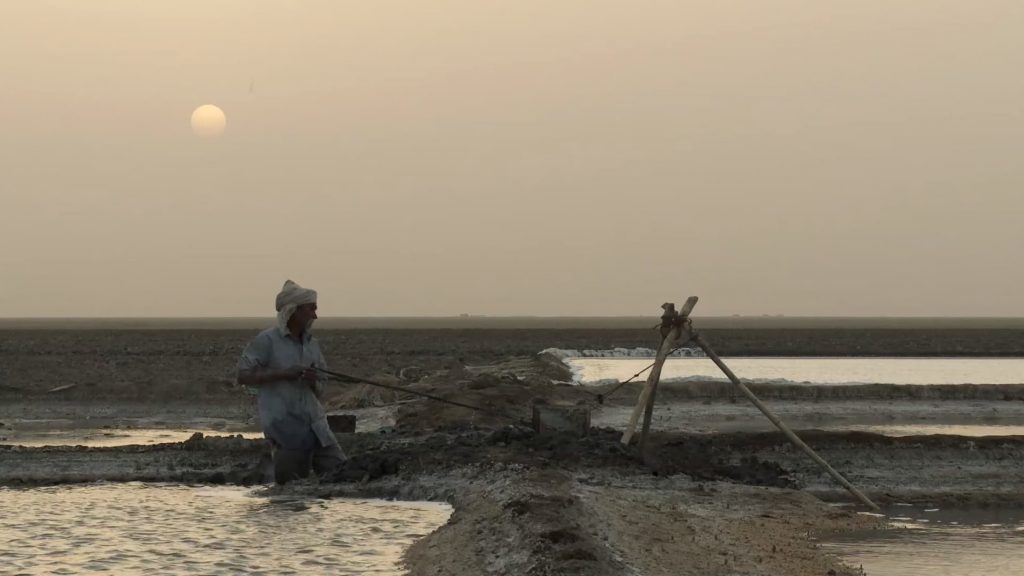 A precious commodity, wars have been waged over salt, and Roman soldiers were sometimes even paid in salt, leading to the modern meaning of the word salary which comes from “sal”, the Latin word for salt. In 1930 Gandhi led the 240 mile Salt March, a nonviolent act of civil disobedience protesting against the British salt monopoly and salt tax, which gained worldwide attention and aided the Indian Independence movement. 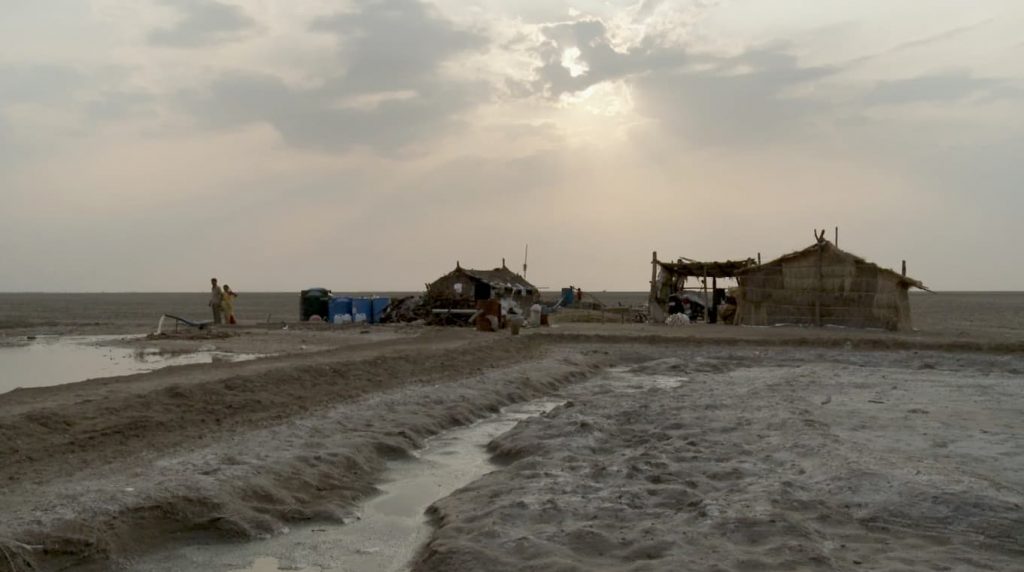 Working around the Monsoon, 40,000 salt farmers arrive once the flooding of the plain has receded to set up make-shift camps, where they will live for most of the year. They dig wells to access the salty water below the ground and pump this to the surface to cover the salt pans, which they dig, roll and rake in labour-intensive and back-breaking work. According to a recent Business Insider video, the farmers in this area make just $4 dollars a ton while this same salt is sold for $260 dollars a ton as table salt, soap or detergent. The farmers are also exposed to high temperatures and health hazards through their work on the salt plains. 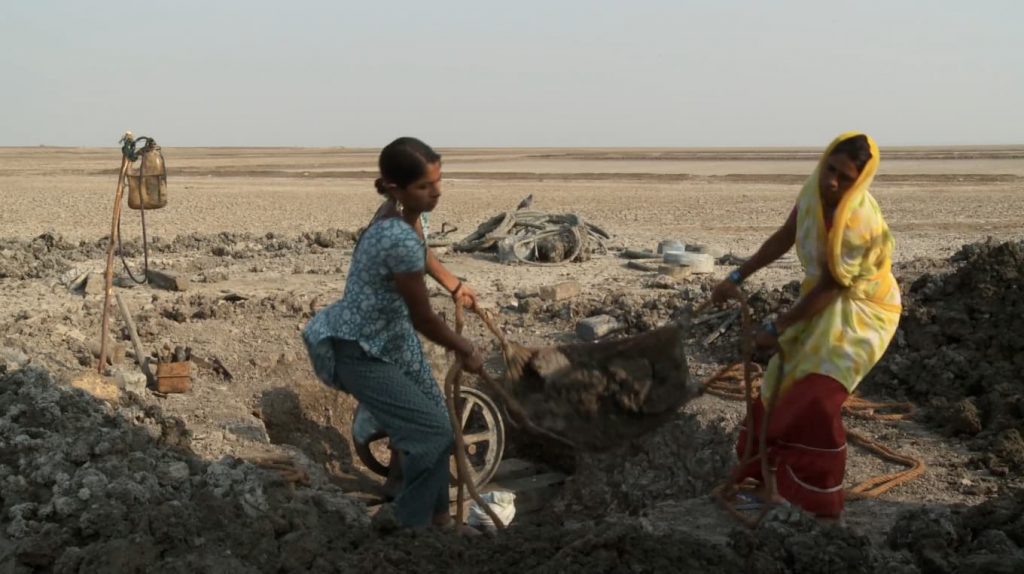 My Name is Salt is an artistic documentary which engages all the senses in its real-time depiction of the cracked salt flats, often with a dreamscape mirage-like quality. Interacting directly with the elements, up to their ankles and wrists in mud in this arid and barren wasteland, the salt farmers tread the earth when it is soft and then use a roller once there is a thick enough crust. They then have to rake the salt pans regularly, their work having the elemental, meditative quality of zen gardening. Although these farmers are both underpaid and undervalued in society, watching them work the land feels like watching artists practicing an art form, the salt flats they are working a huge canvas they have to prepare properly to get the correct effect. 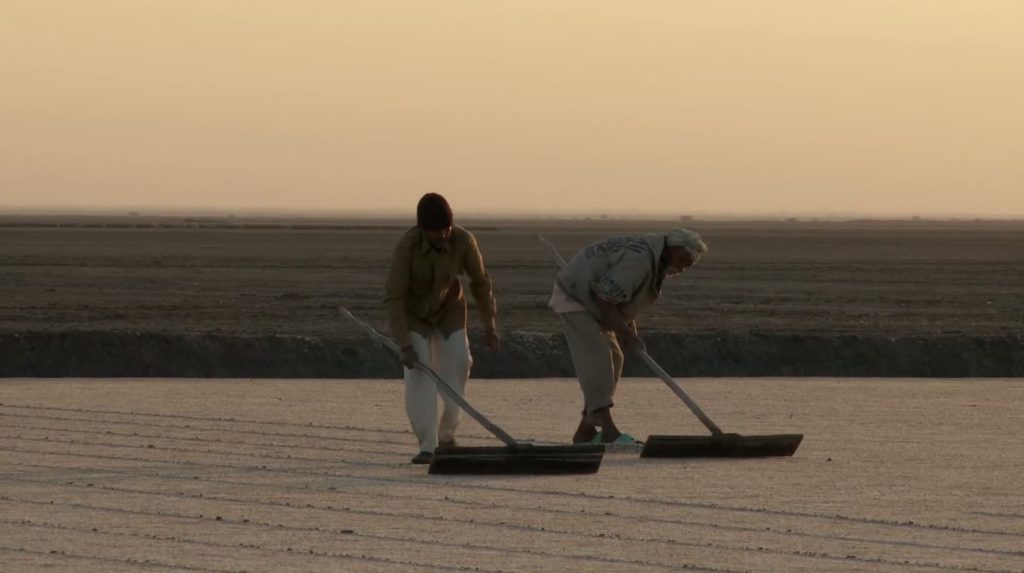 The starkness of tractors and the farmers’ make-shift huts and furniture against the vastness of the sky and empty salt plains gives the entire documentary an artistic aesthetic, and highlights the fragility of the human being, exposed to the elements in the desolate, saline, relentless desert. Within these harsh conditions, the documentary offers a rich sensory experience, with real-time filming of meditative activities, against a soundscape of birdsong, crickets and digging or stamping, as the whole family comes together in their joint task. Incredibly in this environment, which seems to be predominantly of dust and mud, the children turn up to the make-shift school well-groomed and turned out. 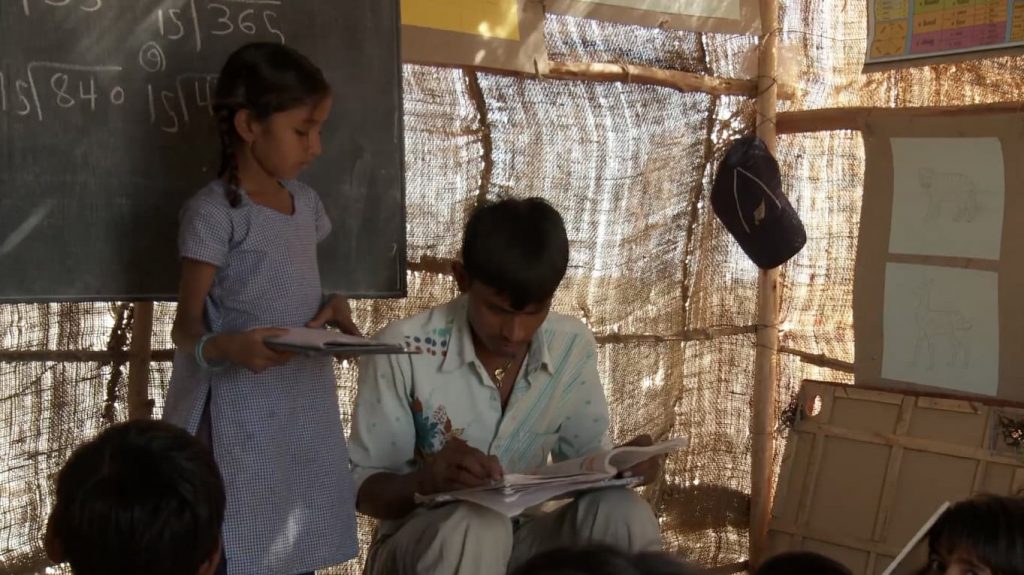 My Name is Salt was Farida Pacha’s first feature length documentary and won her the First Appearance Award at IDFA, Amsterdam in 2013. In 2006 she won the National Indian Film Award for her documentary The Seedkeepers. Rather than interviewing the farmers or having a narrator tell us what is going on, My Name is Salt chronicles their daily lives in this harsh but mesmerising and somewhat surreal landscape, documenting the processes of salt farming in a “show don’t tell” approach that lends the documentary a story-like, cinematic quality, and contributes to making the documentary itself a piece of art. 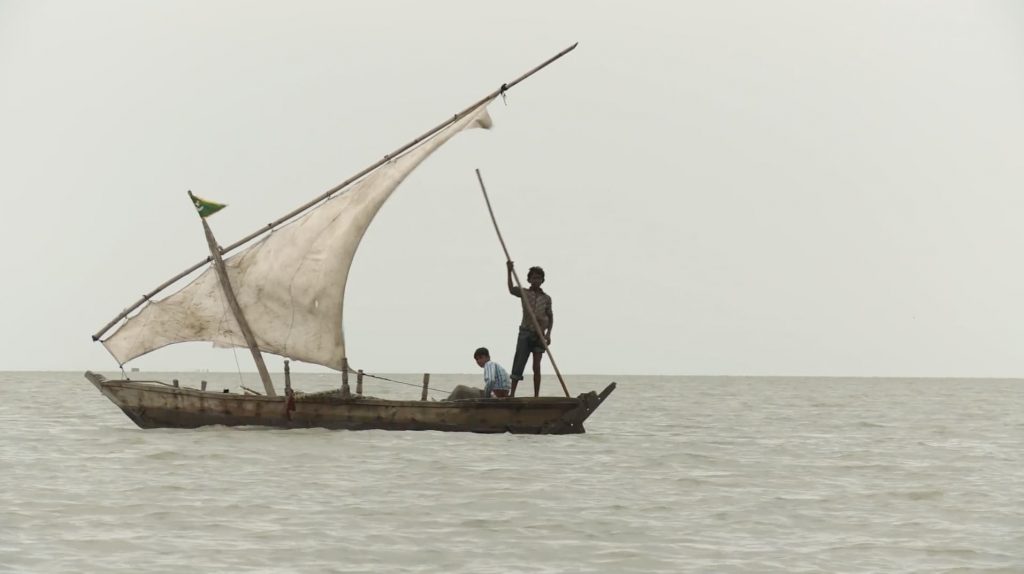