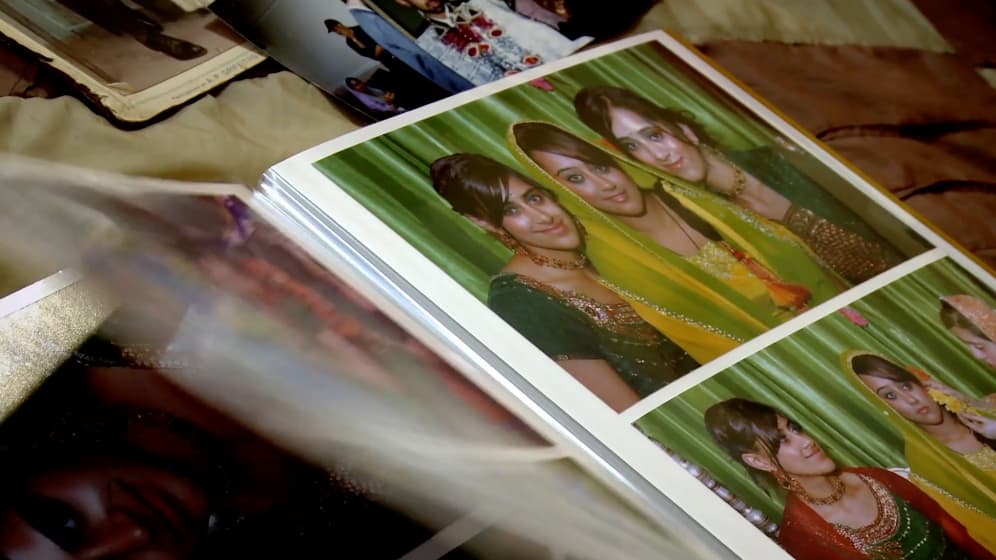 The documentary Sisters in Faith is a tribute to three generations of British Muslim women, exploring their past and present, and the promise of a bright future. 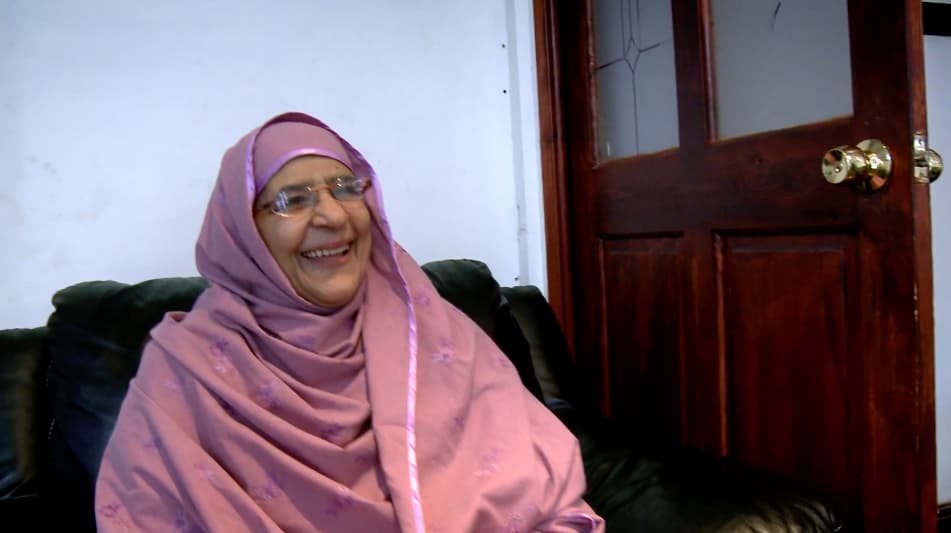 British Muslim women are trailblazers, the first generation of whom left their ancestral homeland to find a new life in a land where they didn’t speak the language or understand the customs, and whose daughters learned to straddle two cultures and worldviews in their quest for a sense of identity and belonging. These women are at the forefront of bridging the so-called clash of civilisations, reconciling different outlooks and paving the way for others, while unapologetically embodying their faith, heritage and British identity in their daily lives. 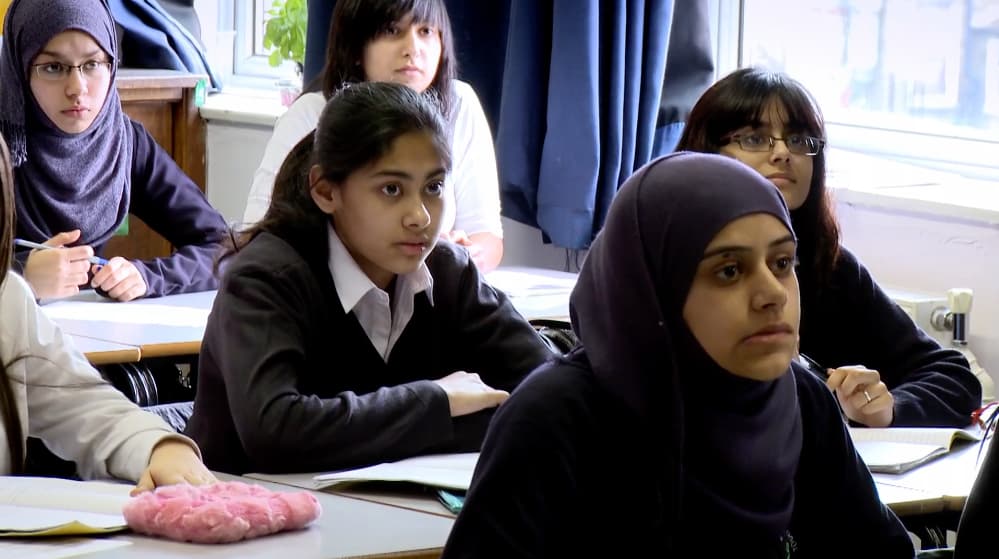 This documentary sets out to explore the hopes and ideals of British Muslim women and how they fit into British society. These are stories we know from our own lives and communities, yet there is something about seeing them acknowledged and documented on the screen that helps viewers to step back and recognise what being a British Muslim woman means from a wider perspective and over time, and how incredible these seemingly mundane stories in fact are in their forging of new identities and paths. 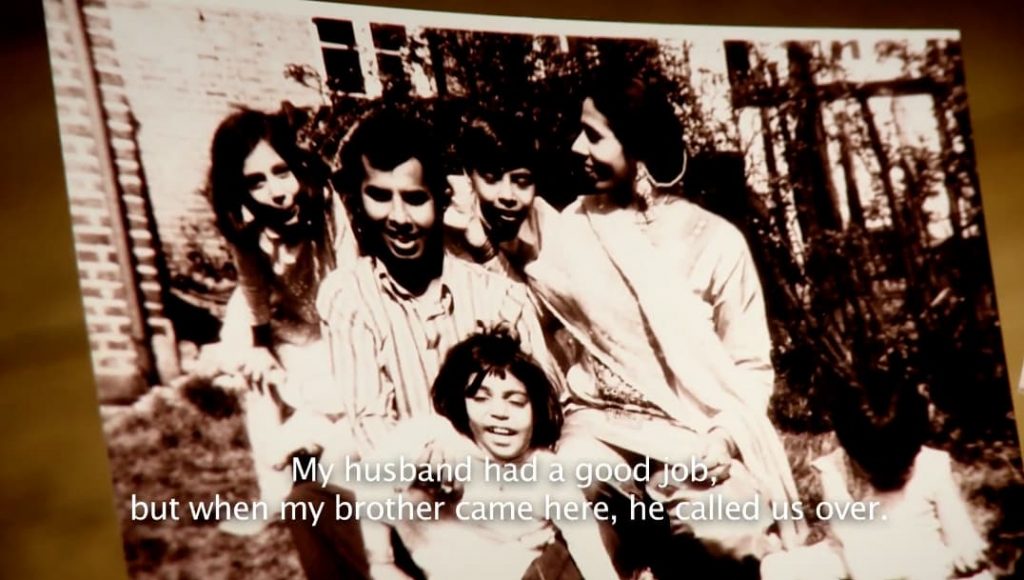 The first wave of Muslim women in the UK came in the 1960s when they moved with their husbands and families to work in steel and textile factories. Azra, interviewed in Sisters in Faith, was one of these women. She moved to the UK thinking that it would offer her children a better education, which she says it did. She worked at home when her children were little and then worked as a machinist in a Marks and Spencer’s factory, making slippers. “I was a machinist and I worked hard” she says. “ I did a good job. When we bought our house, we bought it in Finchley, then I felt I wanted to stay here. Then I felt like I was in my own country.”

One of the families that Sisters in Faith focuses on is the Khan family, who live in East Ham in London, in an area with lots of Indians, Pakistanis and Bangladeshis. Tanzila is a housewife who lives with her husband Sohail, her parents in law, and her three youngest children. Her oldest daughter Aisha is already married. Talking about her faith Tanzila says “In my life Islam is everywhere. When I sleep, when I eat. In everything Islam comes first… At home we teach the children a lot of Islam. Every Sunday there is a gathering at our house where we teach children their prayers.” 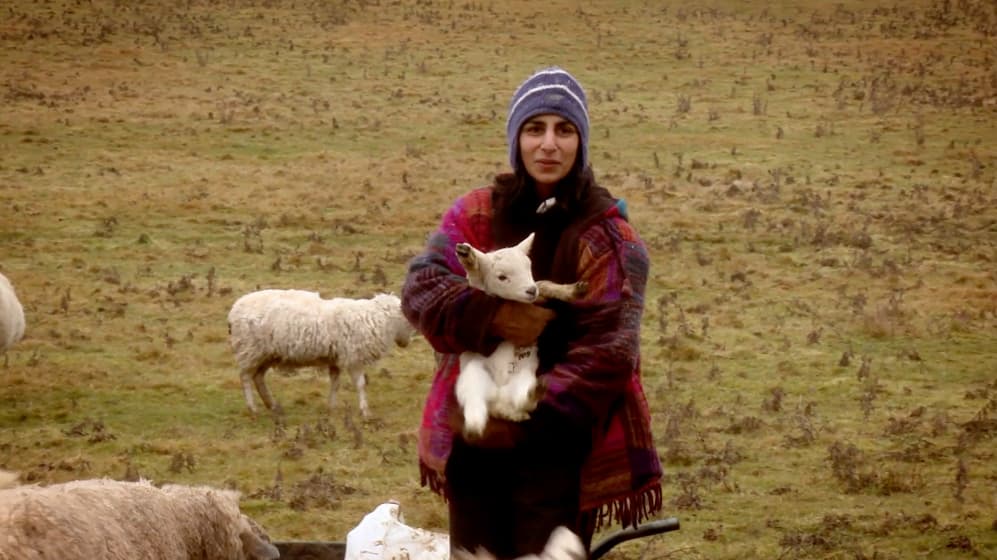 Ruby, a second generation British Pakistani and the daughter of Azra, lives on Willowbrook Farm, the first organic halal farm in the UK, with her husband Lutfi and three younger children. Her oldest two are at university. Their days starts at 7:30 with eating breakfast and getting the kids to school. By midmorning she is out doing chores on the farm. “Certainly I do use the principles that are laid down in Islam to guide my life,” she says. “and if I’m uncertain about something I think about what it would say in the Quran or what the Prophet Muhammad would do in that situation, and that’s enormously helpful.” 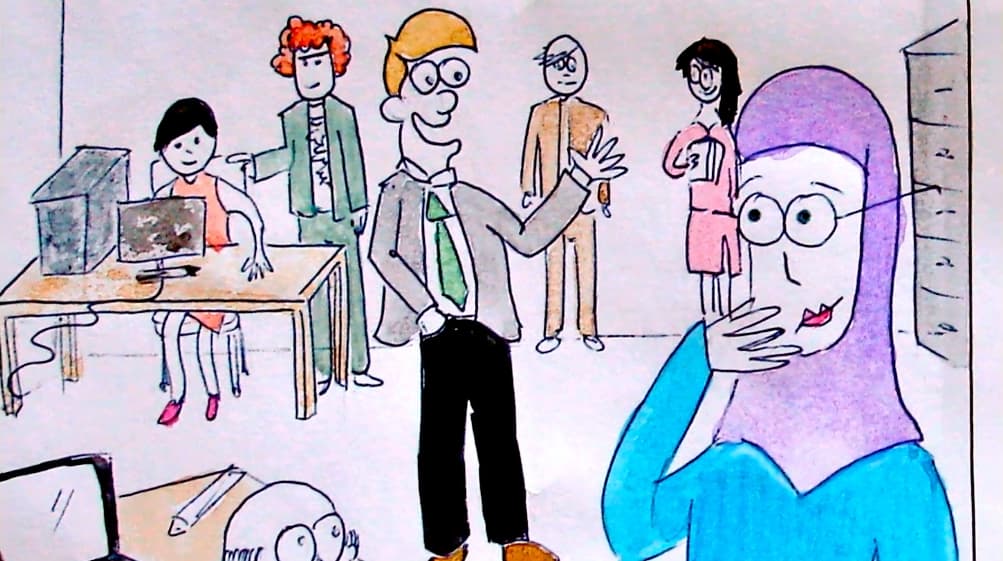 The documentary looks at the sometimes divisive topic of wearing hijab.  Yasmin is a British Transport police officer and convert. “I decided to wear a headscarf to show my beliefs as a Muslim, and to set an example,” she says. “At the moment I’m the only one in the British Transport Police that actually patrols in a headscarf… at the end of the day you’re spreading the word of Islam as well and you’re showing people that we’re not terrorists, and we’re just happy individuals and just want to lead a normal life.” 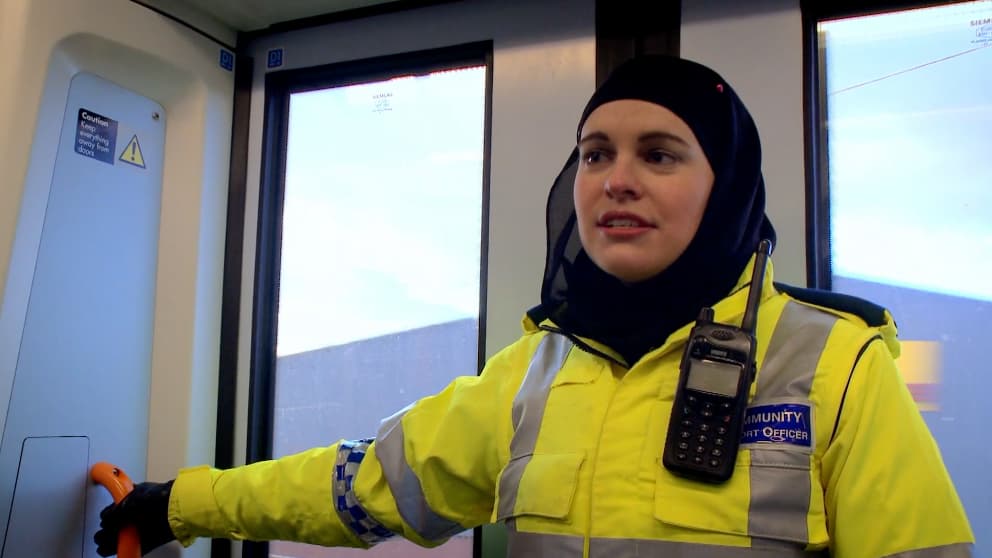 Shaista Gohir is the Head of the Muslim Women’s Network . She says that attitudes towards dress for Muslim women have changed in recent years. “The dress code of Muslim women, I do feel, has become the sixth pillar… I’ve noticed the wearing of the headscarf has increased, and also veiling has increased. There is discrimination against Muslim women that wear the headscarf, but equally, and this is something that really gets ignored, there is also discrimination against women like myself who don’t cover – somehow you’re less of a Muslim or you’re not a practicing Muslim – and that did not happen years ago.” 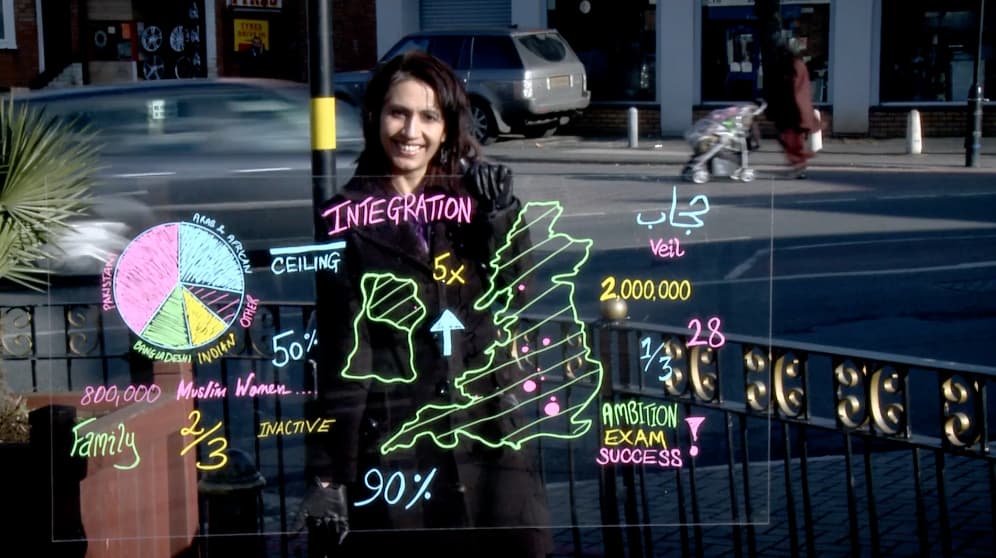 Changing attitudes to marriage, school and work for Muslim women

Sisters in Faith also looks at changing attitudes to marriage in the Muslim community over the generations, with arranged marriages becoming less and less common. The women in the documentary talk about their own marriages, how things have changed, and how they will be different for their daughters. Forced marriages are still problematic in some communities though. The founder of the Henna Foundation in Cardiff, Shahien Taj is kept busy in the documentary helping girls who are trying to escape forced marriages, and encounters hostility from within the Muslim community although forced marriages are cultural and not Islamic. 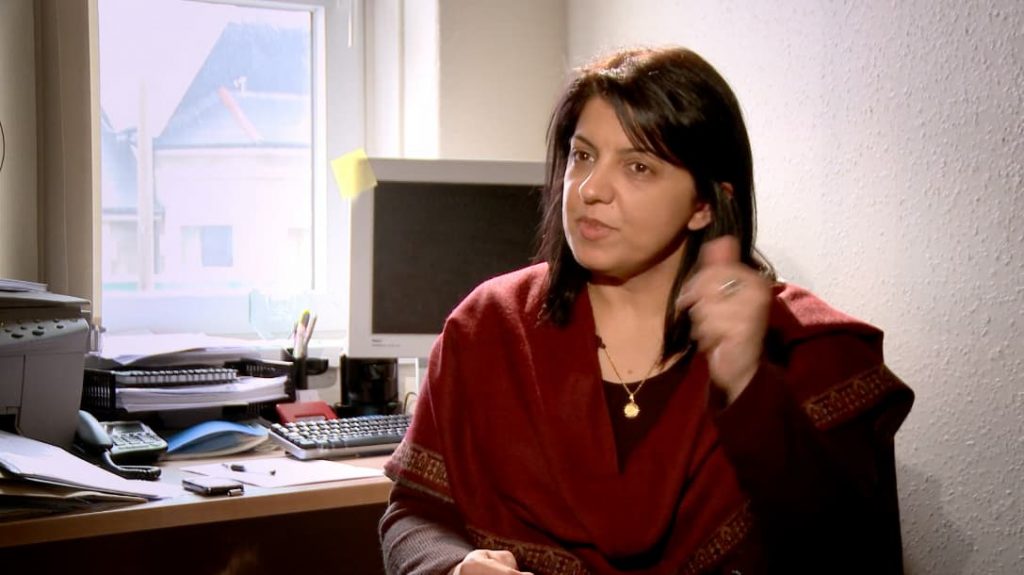 While a large number of Muslim women still choose to stay at home and raise their families rather than go out to work, this ideal is changing with younger generations. Farmida Bi is a banking lawyer, who was voted one of Britain’s five most powerful Muslim women by the Times newspaper. “My career is something I need in a very deep, profound way,” she says. “The Prophet’s first wife was a merchant. She was a very successful businesswoman. And early Islam very much promoted the education of women. There are instances of Muslim women judges, generals, courtiers, all sorts of things, and we’re being very aggressive in suggesting that Islam somehow prevents women from working.” 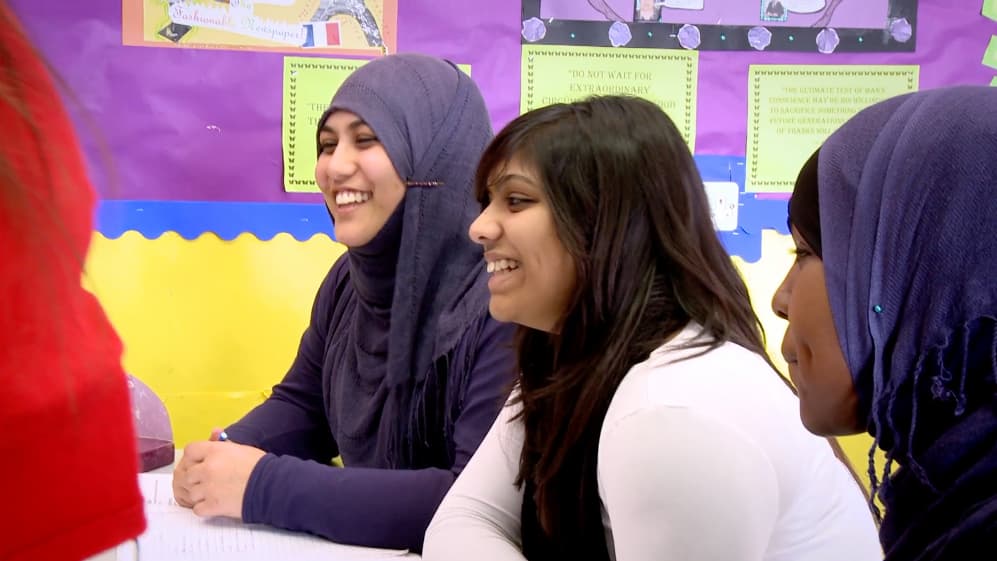 Muslim girls are outperforming boys at school and many aspire to a fulfilling career as well as getting married and having children. This documentary is a tribute to British Muslim women and the diverse identities and lives they are forging in the UK. The women and girls interviewed in it are full of optimism and positivity, not just concerning the present but also with regards to a bright future for Muslim women in Britain.