Documentaries for Ramadan: 1. The Rebellion of the Muezzins of Cairo

From the gridlocked Cairo streets, Cairo in One Breath takes you inside the beautiful ancient mosques of Cairo to talk to the muezzins replaced by an adhan broadcasting device.

In 2009 the Egyptian Ministry of Endowments introduced the unified adhan project to cut out noise pollution, replacing the individual adhans of the city’s thousands of mosques with a single adhan broadcast from each mosque simultaneously. For the muezzins of these mosques it was a great blow, as they were asked to step down from performing their sacred function, to be replaced by a machine playing the call to prayer. In the aftermath of the January 25th 2011 revolution, some of these muezzins took steps to reclaim the calling of the adhan in their mosques. Cairo in One Breath looks at the reasons for their resistance to the project and asks essential questions about the interaction of technological advances and sacred rites and spaces. 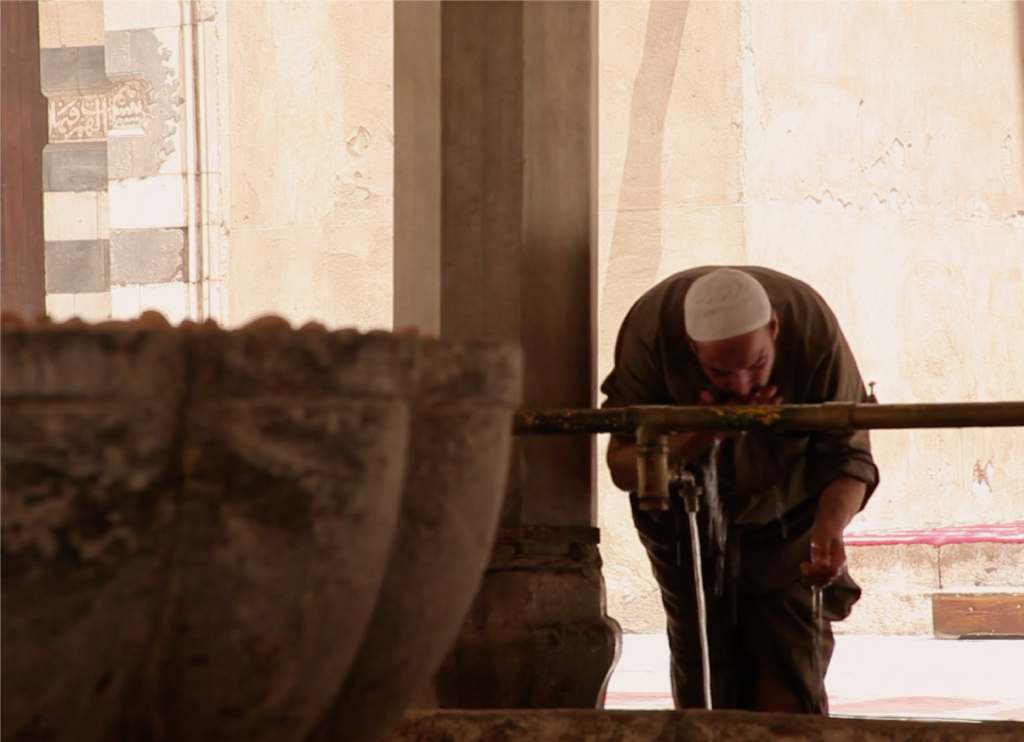 The documentary begins with scenes of the streets and skyline of modern Cairo, moving into the stunning internal spaces of its timeless mosques, with courtyards of marble, intricate geometric woodwork and traditional surface decorations. A few items such as the whirring fans and machine-made prayer carpets are all that mark what century we are in. Sitting in the 14th century Sarghatmash mosque in Cairo, Hanafi Mahmoud, the volunteer muezzin, tells us the hadith of how the adhan came into being, describing how a bell and a horn were considered as ways to call people to prayer, until the adhan was revealed in a dream.

As we are introduced to the sounds and sights of Cairo, the relationship of sacred sound and sacred space is highlighted, sacred space expanding with the calling of the adhan five times a day to include all who hear it, and then starting to contract again as the sounds die away. We meet the muezzin of the El-Mahmoudia mosque, Hamed Abdallah, working in the fields with his family and softly singing a song about his love for Egypt. He tells us “People came to install the device, talking about some adhan unification thing… A person had no choice but to be upset. It made you feel worthless. What was the point in even coming to work? Just to sit around in the mosque? The thing about the adhan is that it gives you something to do, not to mention the benefits for the afterlife, the thawab.” 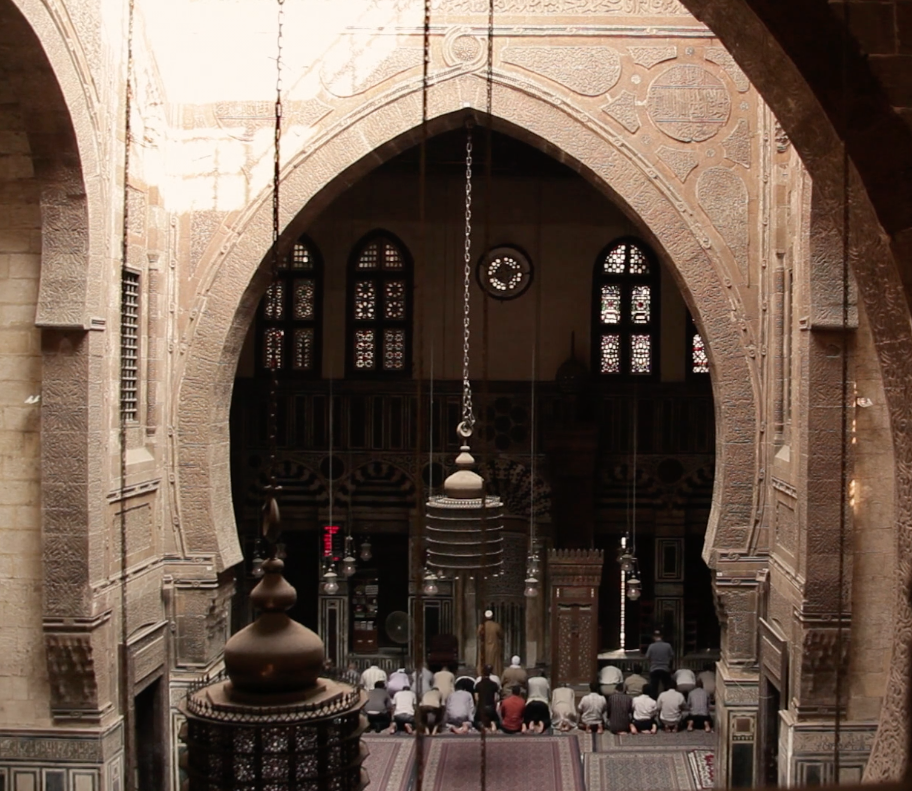 Daniel Dendra, who designed a 3D representation of the sounds of Cairo, discusses the unique soundscapes of different cities. “Subconsciously it affects people even if you don’t really realise it… it’s also important because people feel themselves belonging to certain soundscapes and it actually makes the identity of a certain place.” Meanwhile, describing Cairo as the most crowded city in the world, artist Khaled Hafez, says it is “the most polluted and the noisiest but it’s probably the most inspiring.”

Recording at Radio Cairo, Muezzin Mohamed Mohamed El-Mereigi, chosen for the unified adhan project because of his good voice and correct adhan recitation, initially says “I feel the same sense of reverence here as anywhere else.” The adhan through the project was originally called and broadcast from the el-Hossein Mosque. It was then moved to the Radio Cairo studio as the facilities were better. Although the muezzins still call the iqama in each individual mosque directly before the prayer, there is something a bit odd about having the adhan recited in a modern recording studio and broadcast to all these ancient sacred spaces while the muezzins and imams stand awkwardly by as it plays. 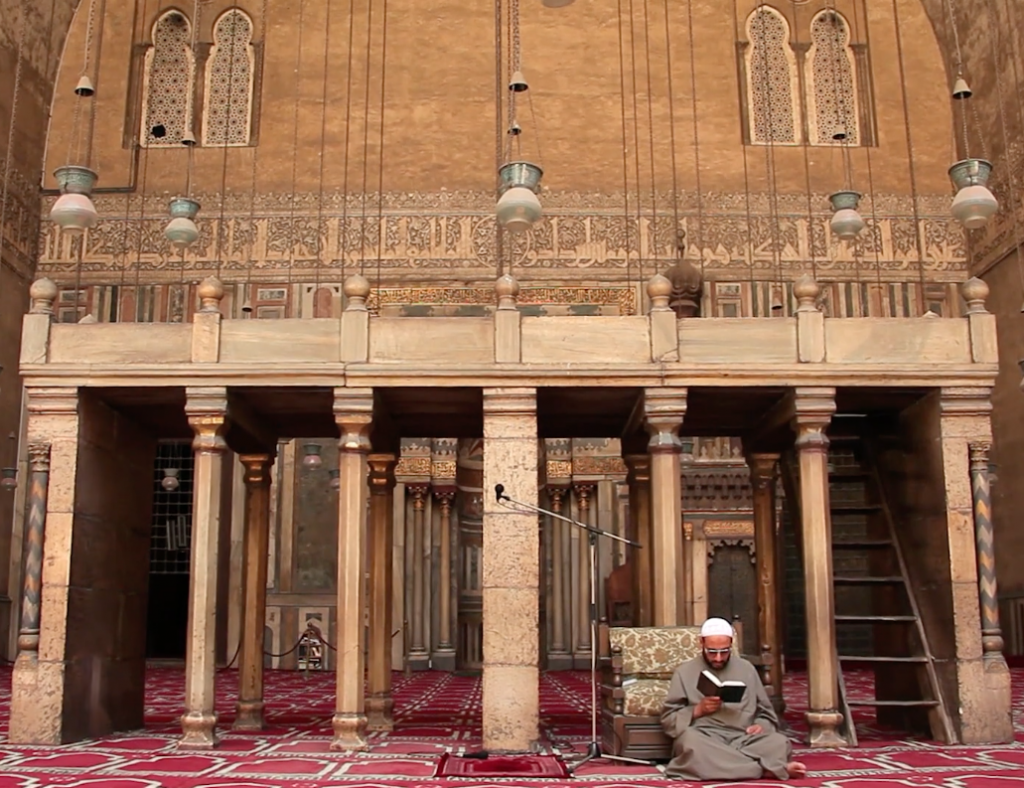 Before the revolution of 2011 officials came to check whether the receiver was working and to do repairs in the mosques, but in its aftermath no one came to check. Hamed Abdallah comments, “Most of the receivers are broken now. It’s true. But back when they were working, it felt like Cairo was exhaling in one breath.” Yusri El-Sayed, the Imam of the Sarghatmash mosque admits “ sometimes the receiver malfunctions, and sometimes we turn it off ourselves. And it is our hope that it will be removed for good.”

The documentary then comes back to one of the official muezzins for the unified adhan project, Mohamed Mohamed el-Mereigi, who has now changed his opinion about reciting the adhan in a studio.
“After doing the adhan both in mosques and on the radio we all agree. There is a certain spirituality to doing the adhan in a mosque surrounded by worshippers. And mosques are houses of God. At the radio station, you close your eyes and imagine you’re in a mosque… In mosques, you can’t wear shoes. You take off your shoes for ablution. And you face Mecca. You face Mecca while reciting the adhan. In the studio, you might have your back to Mecca.” 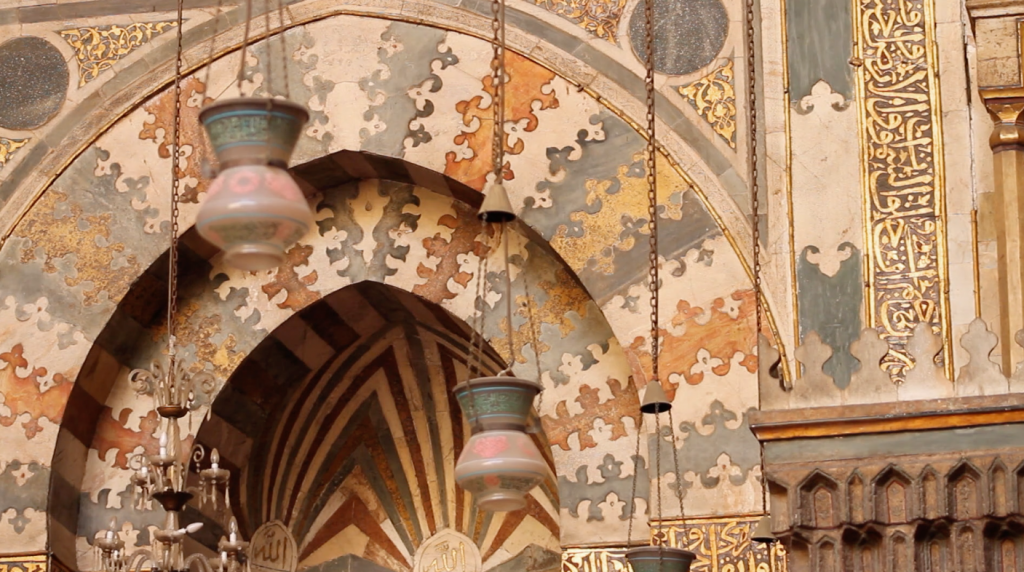 Today Cairo’s streets are filled with beeping traffic, and more rubble and litter than you might expect, surrounding crumbling facades of shuttered colonial buildings. Greater Cairo is a sprawling metropolis with a  population of over 20 million, including slums and extra-legal neighbourhoods, built with no urban planning or municipal services. Yet upon entering the mosques of Cairo we still get the same sense of awe visitors from times past must have. Mamluk glass oil lamps, striped archways, marble columns, inlaid minbars and fountains greet visitors to its centuries-old mosques, massive hewn stones making up their walls.

A skyline of Cairo’s distinctive minarets and flocks of birds flying in unison makes you wonder what it must have been like when a muezzin from each mosque climbed its minaret to call the adhan without a loudspeaker. Without any technological amplification perhaps no cacophony of adhans ensued. 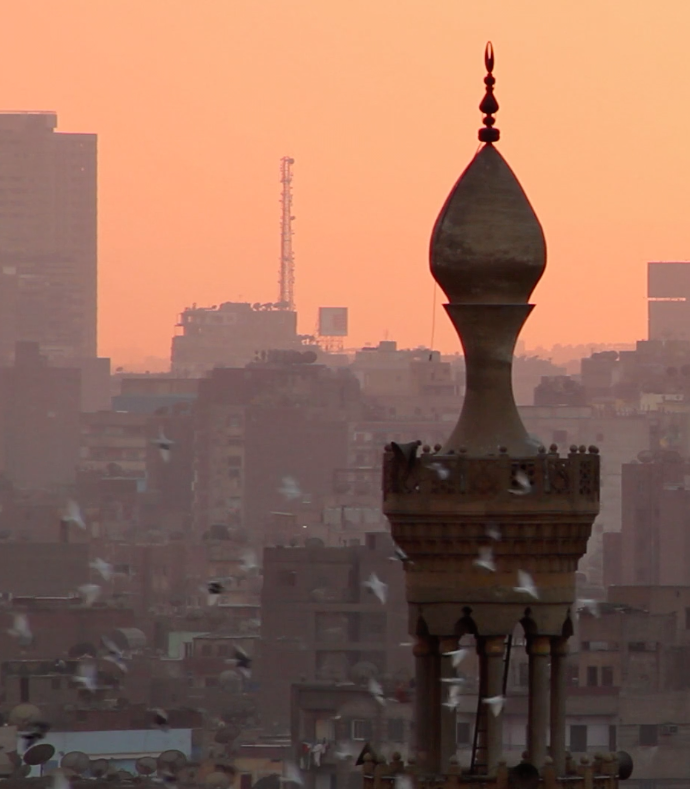 Describing Cairo, the 14th century Ibn Khaldun recorded,
“What one can imagine always surpasses what one can see, because of the scope of the imagination. There is only one exception: Cairo – this city surpasses anything you can imagine about it.”

If you’ve always wanted to visit Cairo and discover its rich Islamic heritage, this is the perfect documentary for the armchair traveller to vicariously experience the beauty of its ancient mosques and minaret-filled skyline, with the artistically shot real time scenes making it feel like you are really there. With travel restrictions easing up it may even inspire you to go there yourselves to see old Cairo before modernity rings the changes further, in this city that has been a centre of Islamic heritage and culture for hundreds of years. 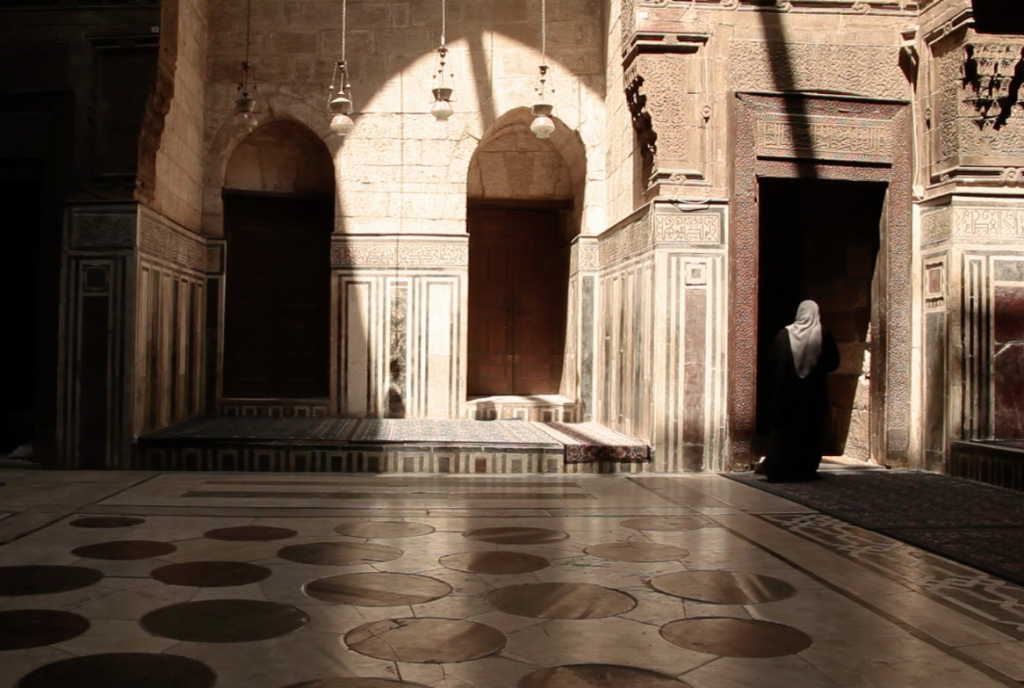 Since the making of Cairo in One Breath, after disruption caused by the revolution – theft of devices from mosques and technical problems being cited as issues, the project was revived in 2019. The Ministry of Endowments recently announced that hundreds of new mosques will be included in the unified adhan project in Greater Cairo, with plans to expand the project to regions across Egypt. The project promises to reduce sound pollution and not disturb people in the neighbourhood by having a pre-set volume. It also assures mosque workers that they are vital to the project as they must activate the receiver five minutes before the adhan. While not wanting to be cast as a Luddite, given the reaction to the project documented in Cairo in One Breath, it’s difficult not to wonder whether this project is the right way forward. While less perfect and noisier, the adhans of the muezzins of individual mosques are local, more traditional and seem to encompass a greater sense of the sacredness inherent in this religious role.