Yunus Emre – The Voice of Love

The Sufi poet Yunus Emre sets out as a wandering dervish on a journey to understand the meaning of divine love, meeting pivotal historical spiritual figures on his way in the 2014 feature film Yunus Emre, the Voice of Love.

Celebrated for his simple and direct verse composed in the Turkish of his day, rather than in Persian or Arabic, the Sufi poet Yunus Emre, born in 1238, has left an enduring mark on Turkish literature and culture. The 2014 feature film Yunus Emre, the Voice of Love is based around what is known about his life, and explores his quest to understand divine love. 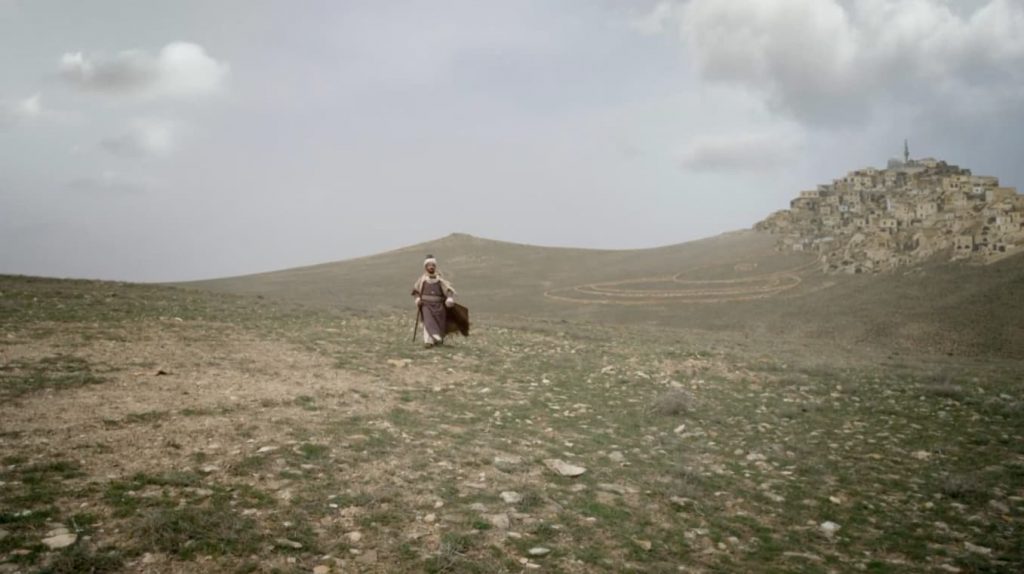 Living at the time of the Mongol invasion and the disintegration of the Seljuk Empire, Yunus Emre composed his verses in Old Anatolian Turkish, in the tradition of the Sufi folk poetry of Ahmed Yesevi. Under the Seljuks the official written languages used were Persian and Arabic, so his simplicity of style and use of the popular spoken Turkish language was unusual for the time. His poetry is known for its wisdom, deep feelings and direct style and has had a profound impact on Turkish literature, influencing late Turkish Sufis and the renaissance of Turkish national poetry in the early twentieth century.

Love is a precious thing.

Love is a wise thing.

It gives voice to rocks.

Love is a strong thing. 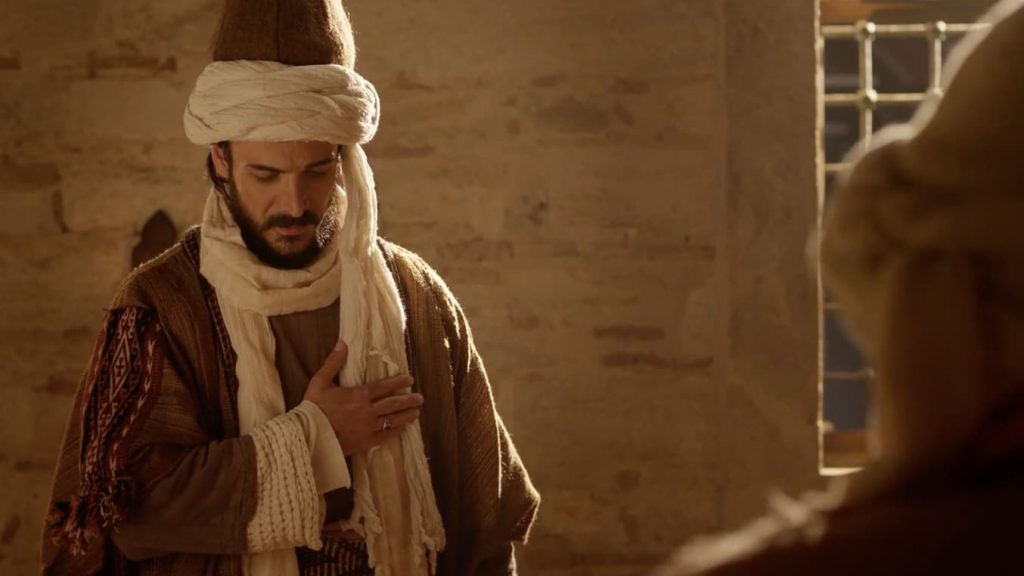 Elements of the film’s storyline are based on stories told in the Bektashi tradition about this wandering dervish poet, such as his visiting Hajj Baktash Vali during a famine to ask for help, and being offered wheat or the miraculous power of the saints. He was also sent to Tapduk Emre by Hajj Baktash Vali, and spent forty years gathering wood at his Sufi lodge. 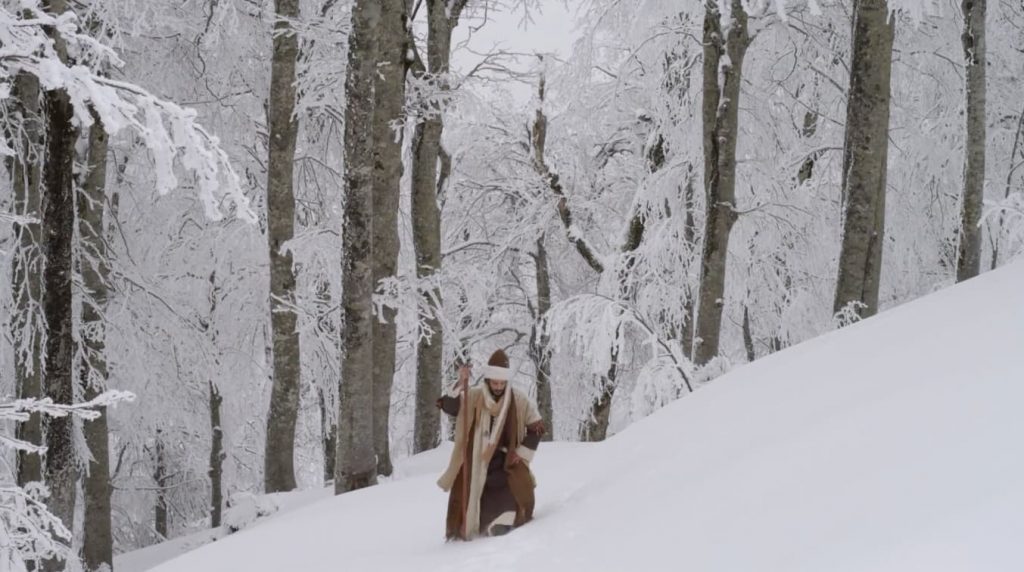 Dramatised in a tale of love, jealousy and tragedy, the film depicts rivalry within the Sufi lodge as Yunus Emre arrives and wins the hearts of his mentor Topduk Emre and his daughter. Tapduk Emre says to him,

“You should know dear Yunus that whenever you speak, you will speak of love. You will reveal the light in your heart and present it to those who can grasp it.” 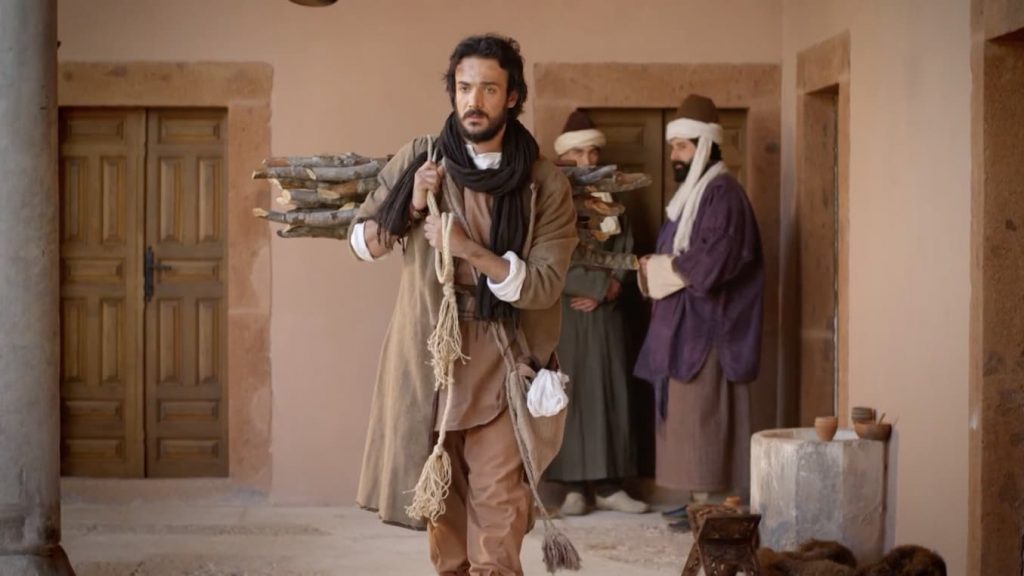 Brother Kasim, a disciple in the lodge develops an intense jealousy of Yunus Emre as he feels displaced by him in the affections of both Tapduk Emre and his daughter.

“I dedicated my entire life to this dargah,” he complains. “I served at each morning prayer and each sunset to my mentor and his family. And then along came a lumberjack dervish to take it all away from me. I used to be my mentor’s favourite and his daughter’s destiny. And now, I am disfavoured! I cannot comprehend.” 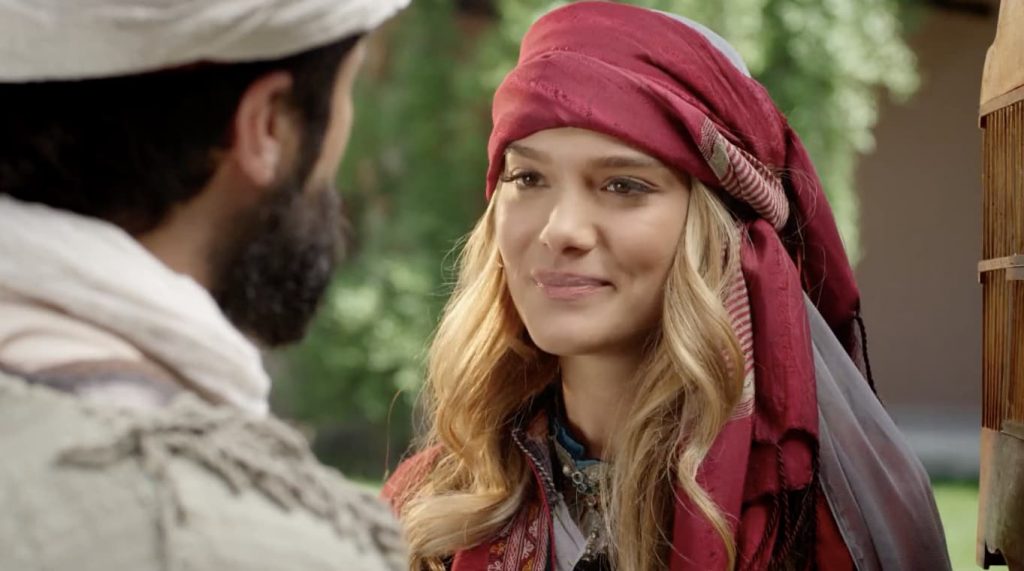 Brother Kasim taunts Yunus in the Sufi lodge, calling after him,

“If carrying wood was what becoming a dervish was all about mules would be scholars.”

At another point in the film he informs Yunus “There are rules in every dargah, and a certain manner to serve it. One does not become a dervish by carrying wood, or by never leaving the mentor’s side. And definitely not by having your eyes on the mentor’s daughter Balim.” 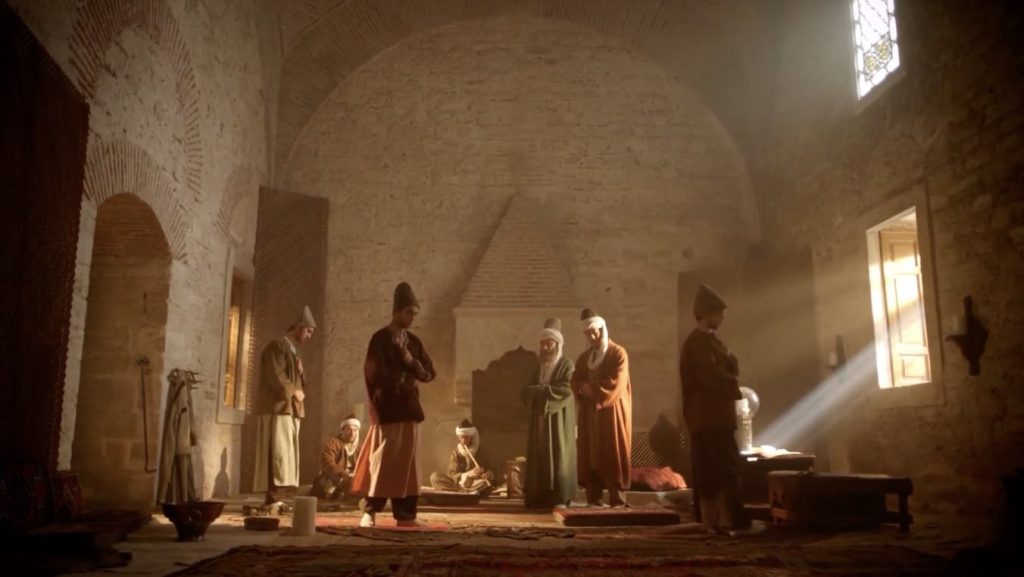 The film takes us through a dreamscape of steppe landscapes, sometimes deep in snow, with visions of Hallaj and visits to spiritually important figures including Rumi. In his wanderings there are also meditative moments of reflection in which he spontaneously recites his verses.

See what love has done to me.

One moment, I am the wind that blows,

The next I am the dust on a road,

And then next, I am powerful like a flood,

See what love has done to me. 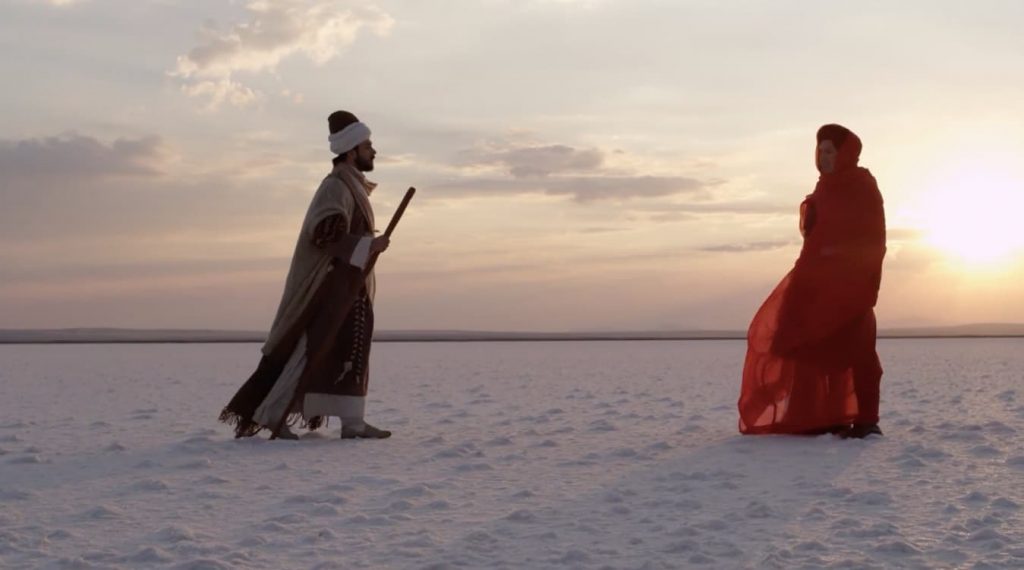 The Sufi saint Sari Saltik is shown describing Yunus Emre to his disciples in the film.

“They say there is a dervish who travels all over Anatolia and speaks from the heart. They say his name is Yunus. He speaks out of love. He recites poems. Let me ask you, my sons, what kind of love makes one go on such a journey?… Sometimes seeking is as important as finding. Whether you do or do not find what you are looking for, it’s best to get cooked and burned while on the path.”

“I am moving in a timeless realm. Without knowing what I seek, I seek.”

Saltik replies, “Now, the timeless and placeless journey of your heart nears an end,” and he tells him to return to the Sufi lodge of Tapduk Emre. 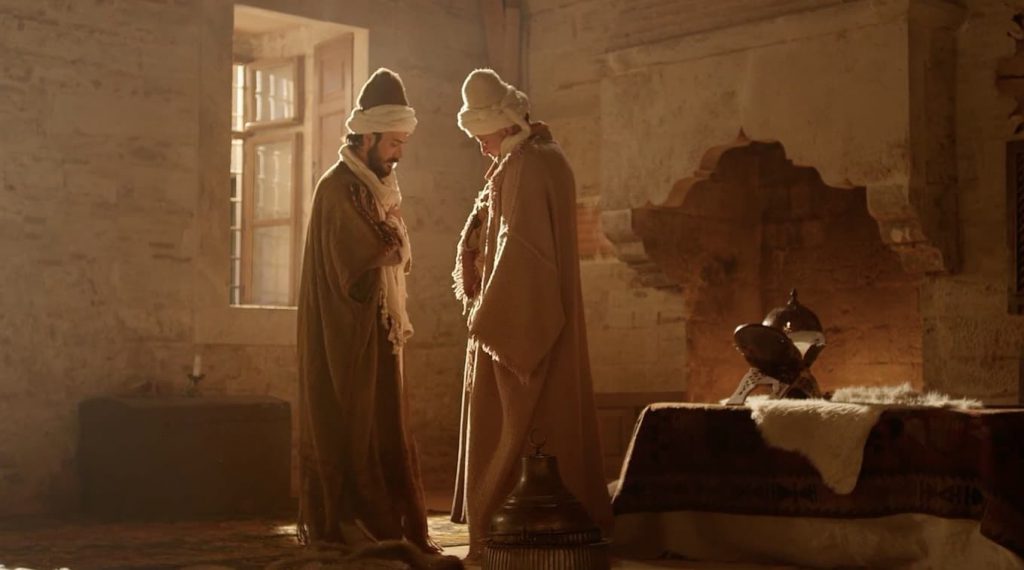 The plot of the film, incorporating a tragic love story, is challenging if you’re looking for a traditional happily ever after narrative, but aims to convey a deeper meaning to life than that of worldly gratification. The fact Yunus gives up the wheat to feed his village in order to pursue his spiritual journey, and his inability to receive the earthly love of Balim despite his love for her, stray into what seems like the territory of neglecting worldly matters and responsibilities by spirituality bypassing them. These more difficult to accept story elements may be intended to challenge the viewer, with the underlying message that spiritual needs are more critically important than even the most essential material ones.

“There are two kinds of love: One is for this world,… the other is the source of everything. One is momentary, the other is eternal.” Yunus tells Balim. 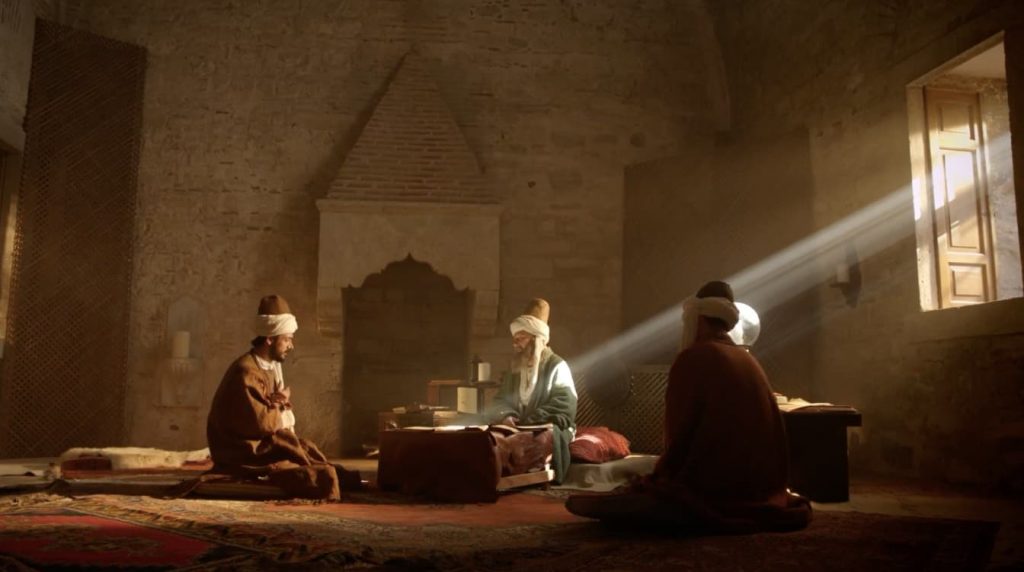 However, in a vision Hallaj indicates that Yunus Emre should stop wandering in order to find what he is seeking, telling him,

“Even if you step foot onto every piece of land in this world, what you are looking for will be waiting for you at the very spot where your journey started.”

When he tells Hallaj,

“I travel from land to land, seeking love.”

Hallaj replies, “This is the land of dearth, not wealth. Look for love inside your heart. Not in Jerusalem, Mecca or the Kaaba.

If you break a heart, your faith is not worthy. Love itself is an endless path.” 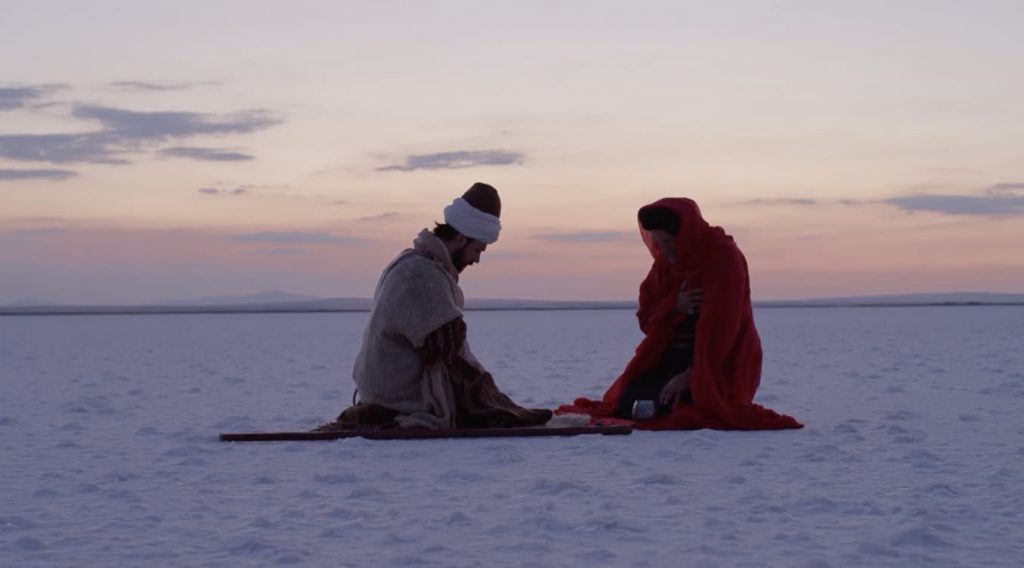